The secular world has taken great exception to the Christian doctrine of sin. Yet as GK Chesterton pointed out, ‘sin’ is one theological doctrine for which we have empirical evidence.  Humanity’s capacity for evil presents us with a dilemma. Either we have fallen immeasurably far from God, or there is no God. Or as Chesterton puts it in Orthodoxy –

If it be true (as it certainly is) that a man can feel exquisite happiness in skinning a cat, then the religious philosopher can only draw one of two deductions. He must either deny the existence of God, as all atheists do; or he must deny the present union between God and man, as all Christians do. The new theologians seem to think it a highly rationalistic solution to deny the cat. 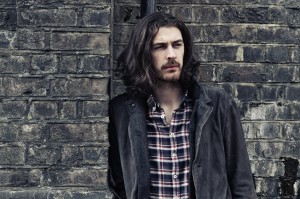 Chesterton famously reminded us that when men stop believing in God, we will believe in any absurdity. The secular world insists that we are not sinners; that we are innately good and worthy individuals. History, philosophy and art remind us that this is a blind, irrational and absurd belief. There is something radically wrong with our nature, something that we urgently need to confront. But when we confront it we find that it is not something that we can remedy. Nor can we ignore it; it is inescapable.

Hozier’s song“Take Me To Church” complains that the Church teaches that he was born sick, yet commands him to be well. A little more self-awareness would tell the singer/song-writer that this lesson was not first taught by the church. The human conscience commands us to be good; and we systematically disobey. Preferring to “worship in the bedroom”, Hozier focuses on sexual lust  – “I was born sick/But I love it”. That lyric is an act of cowardice: amorality is easier to sell when sexual kicks are on sale. But what about our other appetites: the taste for power, experience and self-advancement? Should we indulge in those? What Hozier’s lust told him to lie and cheat, and to needlessly break hearts? His conscience, surely, would forbid him. Hopefully, he would obey. But  acts of obedience cannot compensate for our disobedience: our conscience tells us to be good all the time. 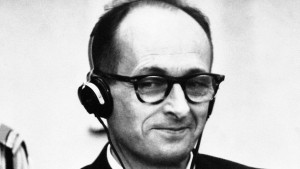 The problem is not merely what we do; it is what we are capable of doing or what we would do when the circumstances suit. When writing  Humanity: a moral history of the Twentieth Century philosopher Jonathan Glover discovered that ordinary men and women were capable of the most terrible crimes simply because they were transported to “plains without a feature”: desolate battlefields in strange and foreign lands, where violent crimes carried no penalties. Glover argues that there humans have  a deep-seated lust for experience and power; if we take our lust to a place where we are not held responsible for our actions and unimaginable atrocity will be the inevitable result.

Hannah Arendt’s observations at the trial of Eichmann, one of the chief architects of the Final Solution, remain pertinent. Arendt’s conclusion that Eichmann was merely a banal bureaucrat has been challenged. However, it seems correct that the motivation that drove Eichmann’s crimes was ‘an extraordinary diligence in looking out for his own advancement’. He would not admit the horrible price for his ambition; especially not to himself. He remained deliberately blind; as did many ordinary Germans, who knew that something terrible was happening to the Jews of Europe.. 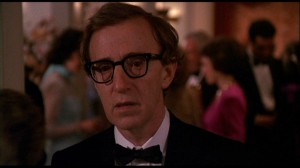 Our chilling capacity for selfish amorality is exposed by Woody Allen’s Crimes and Misdemeanours. Allen weaves two tales together to reveal a ruthlessness deep in our heart’s core. In the first tale, Cliff, an idealistic documentary maker is at a dead end. He is struggling financially and his marriage is beyond repair. (He only remembers his anniversary because it falls on the same date as Hitler’s birthday). But there is hope. His brother-in-law, Lester, might be a bully and a fraud; but he is also a powerful television executive who wishes to hire Cliff to make an adulatory documentary chronicling Lester’s artistic achievements. If Cliff can swallow his principles and make a film that ignores the truth about Lester, then he will finally have his foot on the bottom rung of Hollywood’s ladder. And if he can’t save his marriage, he can perhaps woo his lovely production assistant Halley away from the libidinous Lester.

Halley Reed (on Lester): After all, he is an American phenomenon.

Clifford Stern: Yeah, but so is acid rain. 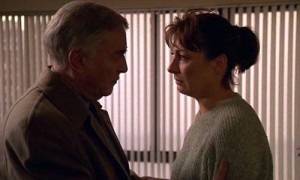 In the second story an ophthalmologist and philanthropist, Judah Rosenthal, is also watching his life unravel. A pillar of his community, Rosenthal has been engaged in an extramarital affair with Dolores.  Dolores is deeply in love with Judah and insists that he now makes good on a promise to leave his wife. Rosenthal realises that he cannot divorce; his wife means too much to him.  But Dolores is willing to blackmail Rosenthal: if he stays faithful to his wife, Dolores will reveal how he embezzled money from charitable funds to temporarily offset his personal financial losses.

Judah has a ‘get-out-of-jail-free’ card. His estranged brother, Jack, is a mobster. With one phone call Jack can make all Judah’s problems disappear. A hit-man will stage a burglary at Dolores’ home and kill her . ‘She’s not an insect!’ protests Judah, ‘You don’t just step on her!’ But he knows that this is the only way that he can escape the consequences of his affair. He takes up his brother’s offer. After Dolores’ murder, Judah sinks into despair and madness, convinced that the eyes of God are on him, always seeing him for what he really is.

Judah Rosenthal: God is a luxury I can’t afford. 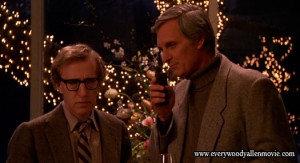 In the final scene the two stories are brought together. Cliff and Judah, who have distant family ties, attend the same wedding. Unlike Judah, Cliff has kept his integrity, viciously lampooning Lester in his documentary. (‘What’s his problem? You think no one had ever been compared to Mussolini before!’) But, as a result, his career is destroyed, his marriage is over and Halley has chosen Lester over Cliff. Lester can shower Halley with white roses every day; Cliff can only plagiarise love letters from James Joyce. Broken hearted and ruined, Cliff stumbles to the bar, where he meets Judah.

Judah, quite unexpectedly, is in good spirits. Remembering that Cliff is a movie producer he suggests an excellent plot for a movie: the story of a doctor who arranged his lover’s murder.  This doctor killed his lover, and nearly lost his privileged life in any case, as he sank into guilt ridden depression. But in time, the guilt lifted and the despair faded away. He returned to his respectable life without consequence. And there, says Judah, the story ends. 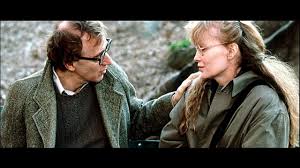 Horrified at such a bleak ending to a film, Cliff insists that if he were making the movie, he would have the doctor confess to restore justice and meaning to the universe. Judah is dismissive. ‘People carry awful deeds around with them. What do you expect him to do? Turn himself in? I mean this is reality. In reality we rationalise, we deny, or we couldn’t go on living.’  No, Judah reasons, if you want an ending like that you should go to a Hollywood movie. God is a luxury that he cannot afford. Others can live in the Kingdom of Heaven. He will content himself with the luxury offered by the real world.

He rejoins his wife and leaves the demoralised Cliff alone.And why is Cliff alone? We overhear the answer in a swift exchange between Lester and his Sister-in-Law (Cliff’s wife). Still smarting over Cliff’s film, Lester pinpoints Cliff’s problem: ‘Let me tell you something. He’s got to grow up. This is the real world. This is the big time. They don’t pay off on high aspirations. You’ve got to deliver.’

Lester: Let me tell you something. He’s got to grow up. This is the real world. This is the big time. They don’t pay off on high aspirations. You’ve got to deliver.’

What links the stories of Cliff and Judah? The “real” world. Judah and Lester both embrace its values. So does Cliff’s wife, who despises him for his idealism. So does Halley, who will marry a fraud for a bouquet of flowers. So does Jack, a mobster who will squash a wronged woman just as he would a bug. They are all connected by the one ethic, the one moral vision. This is the big time, the real world. You’ve got to do whatever it takes to deliver. 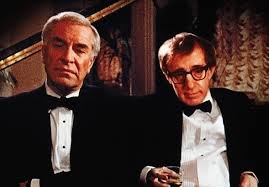 The message is chilling because we all can live like this. We are capable of decent things. We are also capable of atrocity. And if we are not capable of atrocity, we are certainly capable of embracing the ethics that make atrocity possible. Just like Lester we are all capable of doing what it takes to get ahead. And this should give us a moment’s pause. For if we can sink to Lester’s level, how can we be sure that we cannot sink to Judah’s?

We’re sick; we are deeply flawed; it’s time to search for a solution. We need to reach beyond human possibility for a remedy; this is where faith and the gospel make an entrance.

This entry was posted in Uncategorized and tagged popular. Bookmark the permalink.