Jerry Coyne on the Incompatibility of Science and Religion

You can read part 2 of this review here

For many years, I’ve read literature on how science relates to religious belief. This includes much material that sees science as being opposed to religion, the books of the New Atheists for example. Sometimes people get the impression that science and religion are incompatible with each other in the sense that if one is true the other must be false, but I soon realized that no-one argues for this.  When you think about it, you can see why. How could science possibly demonstrate the non-existence of God? Even the New Atheists don’t claim that science and religion are incompatible; they argue that science makes God redundant, not that it logically rules out God’s existence. 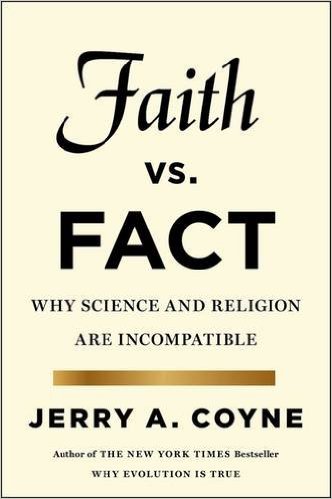 But in the end I was relieved (although a bit disappointed since it would have been interesting to find someone defending this view) that Coyne was not really defending such a ludicrous position. He states clearly on p. 63

‘I don’t mean logical incompatibility: that the existence of religion is simply and a priori incompatible with the practice of science. That’s clearly wrong, for in principle there could be both science and a god to be worshipped.

It’s worth pausing for a moment here just for the benefit of anyone who has been misled into thinking that science logically rules out religion or the existence of God. It doesn’t. Nobody thinks that it does, not even the New Atheists and clearly not Jerry Coyne.

So what does Coyne mean by incompatible? Well he doesn’t mean practical incompatibility either: ‘the idea that one simply can’t be a religious scientist or a science-friendly believer.’ He points out that ‘That’s clearly false as well, for there are many examples of both.’ And he doesn’t mean that religious people are generally opposed to science. He writes that:

Although some believers have problems with evolution and cosmology, the vast majority have no problem with issues like how genetics works, what causes disease and how to treat it, how molecules react chemically with one another, and the principles of aerodynamics.

To explain what he does mean, Coyne refers to the Oxford English Dictionary’s definition of ‘compatibility’:

Mutually tolerant; capable of being admitted together, or of existing together in the same subject; accordant consistent, congruous, agreeable.

But then he goes on to say that science and religion could be considered ‘mutually tolerant’ and even seen as ‘capable of being admitted together’. Finally, he states:

My claim is this: science and religion are incompatible because they have different methods for getting knowledge about reality, have different ways of assessing the reliability of that knowledge, and, in the end, arrive at conflicting conclusions about the universe.

In a future article, I’ll look at why Coyne thinks these differences are significant, but for the moment it’s worth noting his point that science and religion arrive at conflicting conclusions. Do they? If so, is this inevitable? Consider belief in the existence of God? Is that belief in conflict with the conclusions of science? Well, as we noted earlier, Coyne doesn’t think so if by ‘conflict’ we mean ‘logically incompatible’. Of course, what is in conflict with belief in God is Coyne’s own worldview: naturalism, the view that the natural world is all there is. It’s important to recognize, however, that naturalism is a philosophical view not a scientific one. So Coyne can’t simply appeal to science and assume that naturalism automatically follows from it.

In summary, Coyne’s claim that science and religion are incompatible is very confused and ends up amounting to little more than the claim that science and religion are different. He tries to argue that these differences are important as we will see. Of course, he thinks that science leads to naturalism, but this a very controversial claim and it certainly isn’t something that science itself tells us. It’s a philosophical claim and needs to be supported by argument. In a future article, we shall consider whether Coyne’s arguments are up to the task.

This entry was posted in Book review, Quick Thoughts and tagged Apologetics, God and Science, Jerry Cone. Bookmark the permalink.