The Argument from Improbability

In what he considers to be the central argument of his book The God Delusion (TGD), Richard Dawkins claims to have shown that ‘God almost certainly does not exist’ (TGD, p. 158). His argument is based on probability and indeed he refers to it as the argument from improbability, which he thinks ‘demonstrates that God, though not technically disprovable, is very very improbable indeed’ (TGD, p. 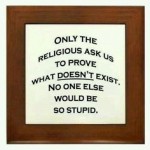 The Presumption of Atheism