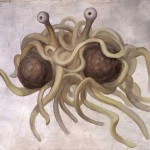 Audio clip: Adobe Flash Player (version 9 or above) is required to play this audio clip. Download the latest version here. You also need to have JavaScript enabled in your browser.

It deals with God’s nature, his holiness, and the evidence for his existence. Beginning with a little parable about greed (based on a famous episode of The Twilight Zone “To Serve Man“), it also refers to Bellini’s Madonna of the Meadow which is also pictured below.Readers might also be interested in this episode of the Unbelievable Show , in which I discuss faith, rationality, “pastagate” and religious freedom. 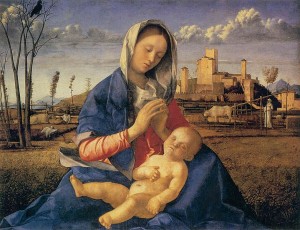 There are several critical problems with the “Flying Spaghetti Monster” parody. First, Pastafarians argue that “faith” is essentially blind: therefore, you might as well have faith in an invisible, intangible being made of pasta as have faith in God. The problem is that Christianity does not depend on blind faith. Philosophers from Anselm and Aquinas to Plantinga and Swinburne have presented robust arguments for the Christian faith. The New Atheist is welcome to disagree with centuries of Christian scholarship; but only a blind, prejudiced dogmatism could pretend that it does not exist!

So a new religious movement based on a transcendent creator will be more successful than a religion which teaches that humans are the reincarnations of the alien beings who died in a trans-galactic rebellion aeons ago. The latter is just too strange an idea to merit consideration. However, the idea that an agent is behind the order and seeming purposefulness of the world does seem plausible. We regularly observe and have direct experience of the power of agency. Indeed, the fact that theism has survived and thrived in multiple cultures strongly suggests that it is very plausible.

Third, the parody presupposes that theism is either meaningless or that theism lacks explanatory power. Is the concept of God meaningless word play? Hardly. It is a coherent concept with explanatory power. God can be described as limitless, loving, personal power (what the Bible calls “holiness”). “Personal power” is simply the power to choose; something that we readily experience. God is such “personal power” without limits. Our choices are limited by our bodies and the nature of the universe that we dwell in. If God exists he would have limitless power because he would not be confined by a body, or by time or space.

The power to choose depends on knowing our options; so limitless power needs perfect knowledge. God would know everything that he was capable of doing; and he would know everything that he has created and is currently sustaining. So this accounts for God’s omniscience. God is loving, personal power” because love requires freedom, and because God is the source of all value and goodness in our universe.

Now that’s a simple, rich description of God. So theism isn’t complicated, and is also quite meaningful. Better yet, theism is able to explain a great deal about our universe and our lives. It accounts for the order which we see in our universe. It explains why the universe has conscious, living, knowing beings. Theism explains why good and evil are as real and as important as electromagnetism or gravity. Theism explains why human lives crave purpose and meaning. FSMs don’t really compare.

But Richard Dawkins disagrees with my reviewer, arguing that the FSM stands for “an infinite number of things whose existence is conceivable and cannot be disproved” (The God Delusion, p.76, 2006). And the Flying Spaghetti Monster’s on-line home cheerfully endorses this interpretation! They’re hardly alone: AmericanHumanists ask “what is the evidence for the existence of invisible beings controlling our world and judging our behavior? None for FSM—and none for Yahweh either.”

In any case (and as I argue in more depth on this episode of the Unbelievable show) Pastafarianism is a poor argument against religious toleration in any case. It is not merely the conviction which we respect, but the freedom to manifest a distinct identity and to convey our convictions to the wider world. Religions do not merely use words, but also  traditions, symbols and signs to communicate. These distinctive practices are rich with narrative, doctrinal and historical significance. We impoverish our culture and reduce our freedom to be different when we legislate against – or naively mock – so called “religious privileges”.

The real problem is that many “Pastafarians” left the Christian faith in their late teens or early twenties, so they tend to have a teenager’s understanding of the Christian faith. (Mind you, in an age when many preachers and pastors have lost interest in developing the Christian mind, who can blame them?) I think I’m meant to be offended by their Spaghetti Monster, but I can’t quite work up the energy. I really don’t mind how many posters they display in public places because they don’t fully comprehend the beliefs that they are rejecting. Their satire, like most of popular secularism, is brainless and heartless; it does not cut either emotionally or intellectually.

This entry was posted in Talks, Uncategorized. Bookmark the permalink.