For Exmas and the Rush distract the minds even of the few from sacred things. And we indeed are glad that men should make merry at Crissmas; but in Exmas there is no merriment left.” C. S. Lewis.

“And the angel said unto them, Fear not: for, behold, I bring you good tidings of great joy, which shall be to all people. For unto you is born this day in the city of David a Saviour, which is Christ the Lord.” Luke Chapter 2: 10-11 (and read by Linus). 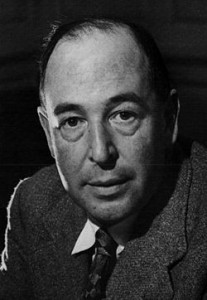 During the last few weeks we have considered some of the words of Advent, words which have been used by various Christian traditions throughout history. We have taken as our theme the four Sundays in Advent – this is the fourth, and the last before Christmas Day.

During the weekend of the first Sunday in Advent there was the experience of Black Friday; and Black Friday was followed by Cyber Monday, Manic Monday and now, during this weekend, Mad Friday.

And the contrast is stark, but it isn’t new.

With that in mind, this week’s Advent words come from C. S. Lewis and Charlie Brown (or, to be more precise, Linus).

In an essay entitled ‘Xmas and Christmas: A Lost Chapter from Herodotus’, C. S. Lewis compared the various Christmas traditions of the Niatirbians (Britain, backwards). It first appeared in Time and Tide, 1954:

In the middle of winter when fogs and rains most abound they have a great festival which they call Exmas , and for fifty days they prepare for it in the fashion I shall describe…

First of all, every citizen is obliged to send to each of his friends and relations a square piece of hard paper stamped with a picture, which in their speech is called an Exmas-card … having bought as many as they suppose to be sufficient, they return to their houses and find there the like cards which others have sent to them. And when they find cards from any to whom they also have sent cards, they throw them away and give thanks to the gods that this labour at least is over for another year. But when they find cards from any to whom they have not sent, then they beat their breasts and wail and utter curses against the sender; and, having sufficiently lamented their misfortune, they put on their boots again and go out into the fog and rain and buy a card for him also. And let this account suffice about Exmas-cards.”

They also send gifts to one another, suffering the same things about the gifts as about the cards, or even worse. For every citizen has to guess the value of the gift which every friend will send to him so that he may send one of equal value, whether he can afford it or not. And they buy as gifts for one another such things as no man ever bought for himself. For the sellers, understanding the custom, put forth all kinds of trumpery, and whatever, being useless and ridiculous, sell as an Exmas gift…This fifty days of preparation is called in their barbarian speech the Exmas Rush…And when I asked him why they endured the Rush, he replied, “It is, O Stranger, a racket.”

But what Hecataeus says, that Exmas and Crissmas are the same, is not credible. For the first, the pictures which are stamped on the Exmas-cards have nothing to do with the sacred story which the priests tell about Crissmas. And secondly, the most part of the Niatirbians, not believing the religion of the few, nevertheless send the gifts and cards and participate in the Rush and drink, wearing paper caps. But it is not likely that men, even being barbarians, should suffer so many and great things in honour of a god they do not believe in.”

And Charlie Brown is available here. Linus appears at about 2 mins 15secs.

From ‘Saints and Sceptics’ to saints and sceptics everywhere – Happy Christmas