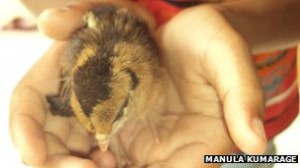 In discussions about the resurrection of Jesus, it’s often claimed that extraordinary claims require extraordinary evidence (ECREE). Is this claim true? A few months ago the BBC website  covered an uncanny and singular event in Sri Lanka, where  a hen gave birth to a chick without an egg. Here’s what the report said,

Instead of passing out of the hen’s body and being incubated outside, the egg was incubated in the hen for 21 days and then hatched inside the hen.

PR Yapa, the chief veterinary officer of Welimada, where it took place, examined the hen’s carcass. He found that the fertilised egg had developed within the hen’s reproductive system, but stayed inside the hen’s body until it hatched.

This is an interesting story, but what are we take make of the claim that it is factual, that a hen gave birth to a chick without an egg? Who ever heard of such a thing? All our experience shows that this kind of thing doesn’t happen. At the very least, it is incredibly improbable. So this really is an extraordinary claim and, of course, extraordinary claims require extraordinary evidence.

So how good is the evidence? Pretty shoddy if you ask me. One very short report on the BBC website. Well, there are some other links, but I’m pretty sure if you follow them up you’ll find that they’re all based on the same single source. So it all depends on the testimony of one person, the chief veterinary officer of Welimada. Where? If he was a leading veterinary scientist at Cambridge University and the birth had been observed in lab conditions, we might have to take it seriously. And he didn’t actually observe the birth at all it seems, never mind under lab conditions. Furthermore, he’s a government veterinary officer so who knows what his motives are. There are plenty of possible explanations that don’t require believing the story.

So we have this weak evidence on one side and against it the evidence of all past experience as well as an understanding of how nature works. You believe the story if you want to, I’ll stick with science and reason.

Despite our sceptic’s concerns, it seems to me that very modest evidence is sufficient to make the claim credible. If my life depended on it I’d certainly want to check it out more, but on the very limited evidence available to me, I’d be inclined to give it the benefit of the doubt. Why? Not because the evidence is as extraordinary as the claim itself. However, this is the sort of evidence that I’d expect if the claim is true and not at all what I’d expect if it the claim is false. This is sufficient to outweigh its initial improbability.[1] So here we have an extraordinary claim requiring no more than very modest evidence.

However, this is just question begging. It assumes that every plausible story must fit into a reasonable naturalistic worldview. That’s exactly the point we are debating. The question is: what kind of evidence is required to support an extraordinary claim? And the answer is that there is no good reason to think that the evidence would need to be extraordinary in the same sense as the claim itself. Suppose someone thinks the claim that God exists is extraordinary. Even so, this claim can be supported by widely acknowledged facts about our universe such as the fine-tuning of physical constants. The reason for this is that such fine-tuning is the kind of thing we’d expect if there is a God, but not at all what we’d expect in an atheistic universe.

Similarly, when it comes to the extraordinary claim that Jesus rose from the dead, there is no reason to think that well-supported and widely accepted historical facts would not suffice. There is nothing extraordinary about an empty tomb or reports of a post-mortem appearance! The point is that while the evidence is just as we’d expect if the resurrection took place, it is very poorly accounted for by naturalistic hypotheses.[2] Extraordinary claims do not require extraordinary evidence.

A further problem is connected to the term “extraordinary”; what exactly does that mean? In 2010’s critically acclaimed drama The Rabbit Hole, when a bereaved mother cannot find spiritual comfort in religion or solace in God, she turns to more “logical” and “scientific” theories of parallel universes. Now, one such theory suggests that we live in an infinite universe, in which everything and everyone in the universe is duplicated an infinite number of times. The film seems to suggest be that we can be comforted with the thought that, “somewhere out there I’m having a good time.”

This is cold comfort. If somewhere out there another “me” is happier, then somewhere else I’m in agony. In some worlds I’ll be killing my children; on others they’ll be killing me. However, let’s set that to one side, and consider the film’s implications  for the slogan “Extraordinary Claims Require Extraordinary Evidence”.

Although the evidence for parallel universes seems very weak, it no longer seems “extraordinary” to believe that multiple copies of earth exist across an infinitely large universe. Theories about multiple universes have tunneled so deeply into popular culture that they can be a source of comfort to the bereaved. What was once a remarkable hypothesis is on the verge of becoming folk wisdom.

Defining “extraordinary” as “strange” or “wonderful” is a dead end. What is considered extraordinary varies from person to person. And while miracles are “extraordinary”, it is clearly false that “miraculous claims require miraculous evidence”. There is nothing miraculous about the rise of a religious movement in a hostile environment, an empty tomb, and testimony that a dead man has been seen alive again. Yet the combination of this evidence is more than enough to confirm the resurrection of Jesus.

Victor Stenger has another interpretation of ECREE. In a debate with theistic philosopher William Lane Craig, Stenger asserted:

But some naturalistic ideas are as weird and wonderful as any appeal to the supernatural. Take the very idea of an infinitely large universe, containing an infinite number of earths and infinitely many copies of you! This seems a bit counter-intuitive, to say the least. Nick Bostrom has suggested that we seriously consider that our universe is really a simulation running on an alien’s computer. Transhumanists believe (against all experience)that human nature can be given an upgrade through technology; one day superpowered cyborgs will rule the earth!

It is clear that Stenger believes theism is…

…the more extraordinary claim–that an unseen power exists that created the universe and responds to human needs.

But science posits unseen powers all the time! We routinely attribute the power of agency to others, and we have all experienced the freedom to make choices. There would be no limits on His power; but if God has the power of agency we are quite familiar with his essential qualities. So what exactly is it about theism that makes it so extraordinary? No clear argument is given. Why, then,  should we prefer an atheist’s educated guesses to a perfectly good theistic explanation? Given the extraordinary claims of some naturalistic theories, we can only assume that this demand for extraordinary evidence is simply a manifestation of atheistic prejudices.

[1] Of course, a lot here depends on what ‘extraordinary’ means. If the term is just used to mean any evidence that outweighs the initial improbability, there isn’t much of a problem with ECREE. But that isn’t what proponents of ECREE usually mean and it doesn’t seem like the right way to use the term ‘extraordinary’ since sometimes fairly modest evidence can do the job as in the present case.

[2] For more on this topic and evidence more generally, see Tim McGrew, ‘Evidence’ in The Routledge Companion to Epistemology (Routledge, 2010), a version of which can be found at http://homepages.wmich.edu/~mcgrew/Evidence.htm

This entry was posted in Uncategorized and tagged ECREE, Faith and Reason, Jesus, Miracles. Bookmark the permalink.