Is Theism Meaningless Wordplay? A Reply to the Courtier’s Reply 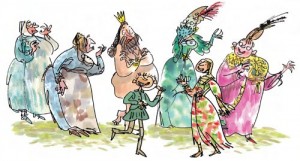 PZ Myers responds to the learned criticisms of Richard Dawkins’ The God Delusion with a parable:  ‘The Courtier’s Reply’ It refers to an episode that takes place after the events narrated in  ‘the Emperor’s New Clothes’:  the fable in which a young boy embarrasses an Emperor who dresses in magical clothes made from an invisible fabric. Of course the boy points  out rather vocally that the emperor is  merely parading through the streets nude . Now the Emperor in PZ Myers’ sequel represents the Church, and the non-existent ‘clothes’ worn by the Emperor are religious beliefs[1]. The boy, naturally, symbolises Richard Dawkins.

But in Myers’ parable the Emperor returns to his palace to find the great intellectuals of the court outraged;  common people should not be allowed to treat sophisticates in this manner. So a scholar is commissioned to pen a letter castigating the masses for listening to little boy Dawkins. In contrast to Dawkins, many of society’s greatest intellectuals adored the Emperor’s New Clothes. The letter reads thus:

I have considered the impudent accusations of Mr Dawkins with exasperation at his lack of serious scholarship. He has apparently not read the detailed discourses of Count Roderigo of Seville on the exquisite and exotic leathers of the Emperor’s boots, nor does he give a moment’s consideration to Bellini’s masterwork, On the Luminescence of the Emperor’s Feathered Hat. We have entire schools dedicated to writing learned treatises on the beauty of the Emperor’s raiment, and every major newspaper runs a section dedicated to imperial fashion; Dawkins cavalierly dismisses them all. He even laughs at the highly popular and most persuasive arguments of his fellow countryman, Lord D. T. Mawkscribbler, who famously pointed out that the Emperor would not wear common cotton, nor uncomfortable polyester, but must, I say must, wear undergarments of the finest silk.

Dawkins arrogantly ignores all these deep philosophical ponderings to crudely accuse the Emperor of nudity.

Personally, I suspect that perhaps the Emperor might not be fully clothed — how else to explain the apparent sloth of the staff at the palace laundry — but, well, everyone else does seem to go on about his clothes, and this Dawkins fellow is such a rude upstart who lacks the wit of my elegant circumlocutions, that, while unable to deal with the substance of his accusations, I should at least chide him for his very bad form.

Until Dawkins has trained in the shops of Paris and Milan, until he has learned to tell the difference between a ruffled flounce and a puffy pantaloon, we should all pretend he has not spoken out against the Emperor’s taste. His training in biology may give him the ability to recognize dangling genitalia when he sees it, but it has not taught him the proper appreciation of Imaginary Fabrics.

Myers’ argument can be summarised thus:

1) Theistic belief is exactly like the Emperor’s belief that he was wearing new clothes – that is to say, theism is obviously false, absurd and dangerous.

2) Of course theists have arguments that this isn’t the case – that in fact theism is not obviously false, absurd and dangerous.

3) But we don’t need to engage those arguments as theism is obviously false, absurd and dangerous.

This is a circular argument, and not worth bothering with. Of course Myers is not interested in forming rational arguments. He wants to create a feeling of certainty in his readers. If it was acknowledged that theists had arguments that might make agnostics ponder their position, then theism would cease to be a superstition and the sceptics sense of intellectual superiority would vanish. Myers literally makes a virtue out of ignorance. He does not expand minds by considering the alternatives to his own position. He does not research his opponents. He doesn’t study up; he dumbs up.

But What does it all Mean? 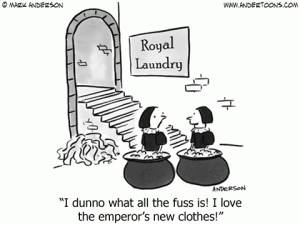 Maybe this is a little unfair to Myers? Theologians can have different conceptions of ‘God’, and some of these are notoriously void of content. Some assert that God doesn’t exist, but that he has ‘being’. Others that we can only say what God isn’t, but not what God is. You can’t say anything for or against that conception of the divine. It just seems to be a matter of taste.

So perhaps Myers  suspects that theism is a meaningless idea. After all, he agrees with Steven Zara, who complains about[2] terms like ‘all-powerful, all-loving, all-knowing’. Apparently ‘these phrases have no more meaning than Lewis Caroll’s “Jabberwocky”. An all-knowing deity has no freedom, and therefore can’t be all-powerful.’[3] But we cannot tell if ‘slithy toves’ can ‘gyre and wamble’ simultaneously because these words don’t mean anything.[4] If terms like ‘all powerful’ and ‘all knowing’ did not have any meaning, Zara could not tell that they contradicted each other!

If Zara had cracked the spine of any decent Systematic Theology he would have discovered that ‘all powerful’ does not mean that God can do something that defies logic. God cannot make square circles any more than he can make the three angles of a triangle equal to the color of its volume. Those are nonsense statements with no meaning whatsoever;  so to say that God cannot do the logically impossible does not detract from his greatness at all.  If God is perfectly loving, he cannot hate. He cannot force a person to make a free choice. ‘Omnipotence’ simply means that God’s power is unsurpassable. Not that God can make nonsense sensible!

Perhaps Myers’ worries that God isn’t a very scientific idea. Theists believe that God is personal, good, with unsurpassable power and knowledge: a God worthy of worship. These are not terms that do not feature  in the physicists’ lexicon.  But a term does not have to play a part in a scientific hypothesis or be experimentally testable to be meaningful. There is no scientific way to measure ‘goodness’, ‘hate’, ‘love’, ‘evil’, ‘meaning’, ‘joy’, ‘melancholy’, ‘awe’ or ‘the sublime’. But we know what these words mean. We also have a good grasp of the meaning of theism.

If we didn’t, the existence of suffering and injustice would not count as evidence against the existence of God. We know that an all-powerful God could end suffering. We know that a perfectly good God would desire to end suffering. So we are left with a puzzle. Why is there suffering in a universe created by a perfect God of unlimited power? In fact, many atheists consider this puzzle to be decisive evidence against the existence of God. So Christians need to provide some reasons for believing that God could have good reasons for allowing suffering and injustice to continue. We’ll set that debate aside for the time being. For the moment, the important point is that there would be no ‘problem of evil’ for theism if terms like ‘God’, ‘all-powerful’ and ‘perfectly good’ were meaningless.

Only Science has the Answers?

Maybe Myers’ underlying concern is that God is not directly, scientifically detectable. A typical New Atheist response to theistic explanations is that they fail to explain, because they do not propose physical forces that can be measured, or physical mechanisms that can be obsereved.  But God is meant to be the creator and sustainer of the physical universe; God can’t be physical by definition. If you insist he must be directly confirmable by scientific experiment, then no amount of evidence will convince you God exists.

Once God is properly and clearly defined we can see that theism is a perfectly clear and coherent idea. Some people see the order of the universe as evidence for theism. Some see the existence of injustice as evidence against theism. And so smart people disagree as to whether or not theism is true. That isn’t surprising. Disagreement rages between scientists over a host of ideas. Biologists disagree over the fundamental unit of selection in evolutionary theory; physicists disagree over the correct interpretation of quantum mechanics.

These debates are not easily resolved; no simple experiment can resolve these matters. That hardly makes the debates unimportant or meaningless. So disagreement over the existence of God does not make theism an unimportant or meaningless idea. Myers cannot dismiss the importance of theism, and neither can Dawkins. Curiously, ‘the Courtier’s reply’ only exposes that New Atheism has no clothes.

[1] It’s ingenious if you think about it. You can’t see the Emperor’s clothes, so they don’t exist. You can’t see God so he mustn’t exist either!
[2] http://richarddawkins.net/articles/531607-it-s-like-he-was-reading-my-mind
[3] ibid.
[4] Jabberwocky is a nonsense rhyme, which begins:”‘Twas brillig, and the slithy toves, Did gyre and gimble in the wabe;, All mimsy were the borogoves, And the mome raths outgrabe.” And then continues in that vein for an unnecessarily long time …
This entry was posted in Existence of God, Quick Thoughts, Science and Christianity and tagged Apologetics, popular, PZMyers. Bookmark the permalink.