The Trinity and the God of Love

Many commentators have viewed evangelicalism’s general support of Kim Davis with a good deal of suspicion. It seems to be a clear case of fundamentalists circling the wagons to shelter one of their own. Indeed, conservative Christians who defend religious liberty are generally seen to be protecting their own self interests. But, contrary to popular opinion, it is very likely that Mrs Davis is not an evangelical Christian – and most evangelical leaders would be aware of this.

Solid Rock Apostolic Church, to which Mrs Davis belongs, apparently is one of a number of Apostolic churches which effectively deny the doctrine of the Trinity. Because the press is showing some interest in Mrs Davis’s denomination, it is important to understand the differences between evangelical Christianity and  Apostolic “Oneness”  Churches. The Apostolic Church directory outlines their controversial “oneness” doctrine:

There is one God who has revealed himself as our Father, in His Son Jesus Christ, and as the Holy Spirit. Jesus Christ is God manifested in the flesh. He is both God and man.”[1]

To make that a little clearer, according to this particular understanding God is one person who takes on different roles. To illustrate, Peter Parker and Spider-man refer to the same person acting under different personas; the different names really refer to different roles which this person must play to achieve his goals. [2] So God has acted like a Father in heaven, an incarnate son on Earth and as a Spirit present amongst his people. The persons of the trinity are just personas, different ways that God has manifested himself in human history.

Now, this seems to be easier to comprehend than the Christian doctrine of the Trinity, which can be summed up in three simple sentences.

Because the first point seems to directly contradict the second and third the doctrine of the Trinity has caused many a theologian many a migraine throughout the history of the Church. Atheists have sometime even alleged that it is a logical contradiction or mystical nonsense or both. But the contradiction is resolved by considering the difference between what God is and who God is.

God is one in terms of what “he” is: God is limitless sovereign power and knowledge. But God is three in terms of who “he” is: three persons who are fully aware of, and in a true relationship with, each other. Father, Son and Holy Spirit know each other exhaustively and love one another perfectly. The same limitless sovereign power and knowledge is fully owned and shared by each person of the Godhead. By sharing the same life and being each person has the attributes unique to God. 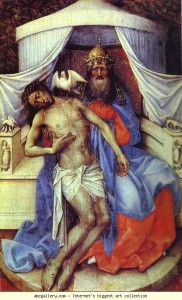 The persons can be distinguished, but they can never be separated. There is total dependency – each would not be God without that relationship with the other two.  It is fairly easy to see why. God is defined as the “perfect being”: we cannot even conceive of anything more perfect than God. But love needs a relationship to be real; communion of some kind is necessary before love can be truly present. So if God was only one person existing from all eternity we would face the problem of the “lonely God” – a God who needed to create other persons before he was truly loving. Before creation there needed to be true relationships, community of some kind, present in the life of God for God to be truly perfect.

Perfect love and knowledge ensure that the persons will always be in agreement: so the God-head has one will. When we consider that each person also shares the same being, the same life, the same sovereign power, the same knowledge, and when we remember that each is united to the others in one eternal relationship, we can see why Christians can say that God is one.

The idea of three persons in one being might be difficult to picture or comprehend. However, the same can be said for general relativity and quantum mechanics. This does not make either theory logically incoherent! In fact, scientists have sometimes hypothesised that more than one “centre of consciousness” can exist in one human organism. Multiple Personality Disorder is very controversial, but not a contradiction in terms.

A little less controversially, patients who have undergone an commissurotomy (cutting nerves in the corpus callosum, which the brain’s two hemispheres use to communicate) can act as if there are two centre’s of consciousness in certain experimental conditions. Now, perhaps they do not have two centres of consciousness – but it is not logically incoherent nonsense to suggest the possibility.

Of course, the point is not that God is like a human with a mental illness or dysfunctional brain! Nor can these conditions give us the slightest insight into what it is like to be God. We are not offering analogies at this point. Our point, rather, is that we can make sense of two or more persons sharing one substance. The Trinity is mysterious because it transcends what the human imagination can comprehend; but it is not bizarre or illogical.

Well, why does any of this matter? Why on earth would evangelicals define those who deny the Trinity outside of the evangelical camp? Because what is at stake is the testimony of Jesus, the message of the Gospels and the very character of God. Jesus referred to himself, and the Gospels clearly portray Jesus, as God. Yet they also distinguish between Jesus and his Father and insist that there is a real relationship between the two. The only way to make sense of this testimony is through the doctrine of the Trinity.

God’s character and greatness are also at stake; indeed, the love of God becomes the key issue. What does it mean to say that “God is love”? Does each person exist in an “I-Thou” relationship with the other persons of the Trinity? Does each person love the other with a self-denying love? Have they done so essentially from all eternity? The “oneness doctrine” would radically change the meaning of texts like John 3v16 –

For God so loved the world that he gave his one and only Son, that whoever believes in him shall not perish but have eternal life.

If it would mean something less for the Father to give the Son if they were not two distinguishable persons. And so the entire nature of the Gospel would be changed.
The Christian doctrine of creation would be altered also because God would not be truly loving until he had created other persons[3].  If the three person’s do not exist in genuinely loving relationships from all eternity, then love is not eternal. Love is not at the centre of the universe; it is not the key that explains everything else that exists.

Comparatively speaking, the love of God fades into the background in monotheistic religions which deny the Trinity. They may focus instead on God’s providence, law, sovereignty or power.  God can seem more familiar, more “like us”, when the Trinity is denied: and we would not expect God to be totally comprehensible. Contemporary physics teaches us that there are limits to human consciousness and imagination; that reality exceeds our expectations. Science has demonstrated that mind bending ideas can have excellent explanatory and predictive power. It would be odd if God was somewhat easier to imagine than the universe he has created!

We are not saying that a person will be damned if they fail basic systematic theology. Many new believers, young believers (and many older Christians too!) have a very muddled view of the Trinity. But monotheists who deny the Trinity have a profoundly different worldview from the Trinitarian Christian. By teaching us that God is a communion of persons, each equally and fully God, the Trinity stretches our minds and challenges our hearts. This is a mark of Christianity’s truth.

“a  Libyan condemned and excommunicated at Rome, …His view has been called a “more sophisticated modalism”. God is essentially one. The Trinity is one of manifestation and not of essence. These manifestations are modes: Father, Son and Holy Spirit. Sabellius used prosopa to mean “role” and not “person”, and seemingly he understood the roles as successive.” James Leo Garrett Systematic Theology: Biblical, Historial & Evangelical Volume:1 (Eerdmans:1990) p278

[3] God could only share full knowledge of himself with an equal: that sort of relationship requires a Trinity. God can only be a community of equals if he is Triune.

This entry was posted in Christian Theology, Quick Thoughts. Bookmark the permalink.