Some time ago, this site pointed out that Donald Trump ranks as one of the most virulently anti-Christian politicians of modern times. He does not even pay lip service to the Christian virtues of fidelity, humility and repentance. He glorifies in the self and he boasts of his worldly possessions. It is no caricature to say that he is a few blasphemies shy of embodying the spirit of an antichrist. 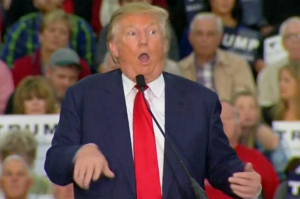 Even Pontius Pilate pondered the nature of truth; but Donald Trump sees facts as inconvenient impediments to his personal progress. Time and again, he and his surrogates have looked directly into the camera and denied things which we have seen with our own eyes.

This shamelessness is only possible because people have abandoned the Truth for what satirist Stephen Colbert calls “Truthiness”:

Now, we might well wonder if the secularised media has the moral capital to challenge “truthiness”. Consider the strident dogmatism which insists that gender has nothing to do with biology and that a healthy child with a beating heart is not a human being because it resides in its mother’s womb. 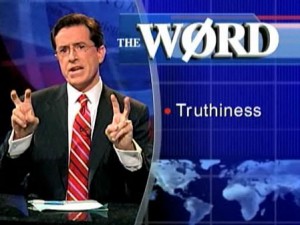 Even Colbert is not above indulging in a little truthiness. For example, his jokes give credence to reports that Russia is using salacious, compromising material to blackmail Donald Trump. The research which led to these allegations was funded by Democrats and anti-Trump Republicans and has been dismissed by the legendary Bob Woodward as “garbage”.

Still, “truthiness” is a reasonably useful definition of relativism: the doctrine  that truth and falsity, right and wrong, or even standards of reasoning  are just a matter of social convention or personal taste. There are no independent, objective moral standards to judge Trump by. Trump is innocent of prejudice because he is not a racist or a misogynist in his opinion and in the opinion of his supporters.

Evangelicals have been complaining about the dangers of relativism for decades; morality does not change shape according to our whims or fashions. Finally, secularists have awoken to the danger. If there is no wrong or right, our political leaders have the right to do whatever they can get away with. There is no right or wrong; there are only winners and losers; and the Donald only has time for winners.

President Obama fretted about Trump’s attitude towards the scientific consensus ; but we’re beginning to see that the moral facts matter more. After all, if someone could convince a moral relativist that human activity is driving climate change he might shrug and say “what of it? I won’t be alive to experience any of the consequences and I have no moral duties beyond those I feel.”

But morality is as real as gravity and electromagnetism. True, we cannot see or measure qualities like venality, cupidity, courage or kindness. But then we cannot see another’s emotions, intentions, thoughts or beliefs. Just we cannot explain the world without a belief in mental states, we cannot explain others without believing something about their moral properties. We assume there are normative standards that we all should acknowledge, presuppose that we all feel the power of those standards, yet have the capacity to resist them. Then, by knowing something about another’s attitudes to morality, we can influence and predict their actions. 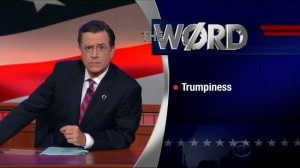 So we do not merely have the evidence of our moral experience and our deepest intuitions. We cannot even explain our own actions without acknowledging the obligations we feel when we make promises or strike up a friendship. We can compromise on matters of taste or preference; but we will not compromise with someone who takes delight in malicious torture. And we feel the weight of some decisions over others: there is a clear difference between deciding to leave one’s job and choosing to leave one’s spouse and children.

Trump could only reach the White House by capitalising on middle America’s sense of injustice. Morality is inescapable; our deliberations and practices are senseless if it is merely an illusion. It is as vital as nutrition for we cannot thrive and flourish without it. The practical, sensible cynics who run the “Free World” would do well to remember that moral facts exist and are essential for our well-being. For in the absence of moral standards humility dies, forgiveness is impossible and common goals are replaced in a brutish, selfish war for personal advantage.

This entry was posted in Book review. Bookmark the permalink.