What Ho, Euthyphro? Or, Why the Euthyphro Objection is Weak

A strong argument for theism is that God best explains several  important features of morality. He explains why individuals have great intrinsic value; why the moral life is a rational life; why we have reliable knowledge of moral truths; and  why there are moral obligations. If theism is true then we live in a moral universe. God would have the knowledge, the character and the power to be the perfect moral authority. We don’t have duties to ideas or principles: we have them to persons, and God would have “property rights” over his creation. This fact would explain why obligations exist and are binding; God’s instructions (revealed to conscience and reason) become our duties.

In fact, theism might explain why our universe contains any moral value. Logic does not dictate that the world had to contain objective moral values – and we can easily conceive of possible worlds which do not contain objective moral values. In fact, many biologists, sociologists and philosophers have argued that morality is an illusion created by our genes or our society. While such attempts to explain morality away are deeply unconvincing they are not incoherent.

I. Is something good because God commands it so or does God command it so because it is good?

II. If something is good because the God commands that it is so, then what is morally reprehensible to us can be good.

III. If God commands that it is good because it is good, then the good is greater than God.

IV. So, either the good is arbitrary or good is greater than God.

The dilemma does not pose any great challenge for theism or the moral argument. Morality depends on more than God’s commands and God’s commands are not arbitrary if he is a rational creator. In the Christian worldview, God grounds morality. He does not invent right and wrong;  he does not lay down moral rules as we might arbitrarily lay down the rules of a new game.  Furthermore, the moral argument is not that God is the only source of every important fact about morality. The moral value of the individual is not contrived by God; it flows logically from the facts about who he is and the universe he has created.

As a matter of brute fact, as the rational creator and sustainer of the universe God is the most important and valuable thing in existence.  If everything else depends on God for its existence then the value that God has for everything else cannot be surpassed. God is supremely rational, and his power cannot be limited by the irrational and chaotic effects of evil. The earth and the opinions of human beings will pass away into the void. God’s values are eternal. His judgements can be trusted, and his worth is inestimable. Whatever God desires is what is good; whatever God wants us to do is right. Whatever such a God desired should be desired by every rational being. Every rational being should do what such a creator wanted us to do. Therefore God is the supreme good.

Why impossible for God to be evil? In his book Evil: Inside Human Violence and Cruelty the distinguished psychologist Roy F. Baumeister outlines both the human conception of pure evil and evil as it appears in atrocities, crime and everyday life. Evil actions stem from poor self-control and an irrational short sightedness. Evil tends to be short sighted and irrationally self-destructive. There is more to evil than inflicting harm (after all, doctors can remove an infected limb): evil is insatiable, irrational and chaotic. An evil person will act impulsively to impose their will on the world. This can bring short term gains, but it is a foolish life strategy, because the risks are so high. If one believes that we should eat, drink and be merry for tomorrow we die then it makes sense to live fast and leave a good looking corpse. If one believes that human lives and actions are of eternal consequence, a wiser course of action should be commended.

God could not be evil and cannot command us to be evil. Christians believe that a God of limitless, loving power created the universe: there are no limits on his rationality. Ultimately, evil is irrational and destructive. God is rational and creative – the opposite of evil. If there is a God, it is impossible for him to be irrational and capricious. Nor could God commend an evil lifestyle, for such a lifestyle is foolish and God has unlimited wisdom. It’s not that God “created” or “invented” good and evil. Rather, God is so wise and valuable that God’s will is identical with the good; whatever perverts or undoes God’s will is evil.

In other words, good and evil, right and wrong, depend on who God is and what he has decided to create. On theism they do not depend on arbitrary and non-rational decisions for God is the ultimate rationality and wisdom. The answer to Euthyprho is that God is the way, the truth and the life. 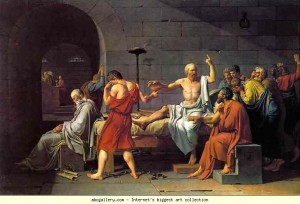 This entry was posted in Existence of God, Quick Thoughts. Bookmark the permalink.