Losing Faith in the Local Paper

The Belfast Telegraph is Northern Ireland’s National Newspaper; we know it locally as ‘The Tele’.On perusing a copy recently I came across this column by Robert McNeil, and noted this subsection.

Plague, flood and famine no longer bother us much, but religion still does.

This is odd since new research shows these three horse-persons of misery are what caused us to imagine moralistic gods in the first place.

Smoke-stained boffins with disarranged hair emerged from their laboratory at North Carolina State University to announce that humans are more likely to believe in scowling, judgemental deities during times of hardship and extreme weather.

When food was scarce or thunder rumbled in the skies, folk panicked and got down on their knees. Soon afterwards, the leading wailers started mincing about in robes, and various logical rules were drawn up about what you could eat and so forth.

On the plus side, religion may have promoted co-operation, fairness and honesty, so it wasn’t all sacrifice, stoning and genocide.

Today religion remains a popular historical hobby but not, thankfully, something we take seriously.

What is notable is the foray of the columnist into the world of apologetics, or anti-apologetics. Apparently no one takes religion seriously anymore, and, apparently, that’s something we should all be (or perhaps all are) thankful for.

Today religion remains a popular historical hobby but not, thankfully, something we take seriously.” 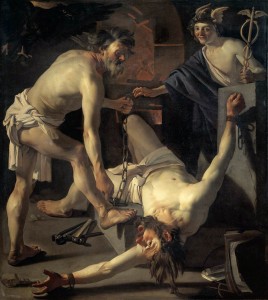 Even allowing for the stated genre of the column –  “Welcome to the Sideways Glance of Our Columnist” – it’s an odd comment, and normally the sort of thing I’d let pass; but what struck me was that it illustrates a view of ‘religion’ which, while common on Internet forums over the last decade or so, had rarely made it into print –  never mind the pages of a well-known and popular Northern Irish newspaper.

Apparently the reason for religion existing in the first place was our fear of “Plague, flood, and famine”, which, apparently, no longer bother us. When food was scarce or thunder rumbled in the skies, folk panicked and got down on their knees….[and then ] the leading wailers started mincing about in robes[i]…”

Anyway, it would seem (apparently) that the ‘Tele’s’ journalist has in mind a version of the, ‘now we know that thunder and lightning are thunder and lightning and not Thor’s Hammer’, we don’t need religion, argument . Only he doesn’t put it that way. Instead, he uses words like ‘mincing’, and ‘wailers’, and ‘smoke-stained’, and ‘boffins’ and then concludes that “religion remains a popular historical hobby…”

So what are we to make of this column? Is it cleverer than it appears? Is it merely dismissing religion?  Or just another cheap jibe? I doubt we’ll  ever really know; and as I write I bear in mind our Northern Ireland capacity for a bit of ‘mild-mannered-mockery-in-the-name-of-good-craic[ii]’. But I do think we can know this – the everyday secular world isn’t really making the effort to make or understand the arguments anymore – parody (in the form of ‘mincing about’) is now enough to help people deal with anything which bothers them more than natural disasters.

(I suspect the first meaning was in the mind of our columnist.)

[ii] “Craic/krak/n news, gossip, fun, entertainment, and enjoyable conversation: The boys went driving round the town just for the craic.”
This entry was posted in Quick Thoughts. Bookmark the permalink.