Recent political debates in Ireland, Great Britain and Northern Ireland have focused on how and when human rights should be protected? But what are human rights? And can we truly have rights in the absence of God? 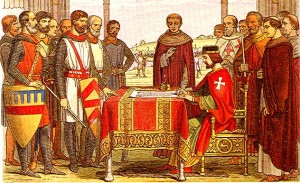 There’s been a lot of talk about human rights lately. Many moral and legal debates are framed in terms of such rights. In the Irish referendum on same-sex marriage, proponents claimed that marriage is a human right that should be available to everyone irrespective of their sexual orientation, while opponents instead asserted the right of children to be brought up by a mother and a father. In the Asher’s bakery case in Northern Ireland, the right of the owners to manifest their religious beliefs was pitted against the right of the customer not to be discriminated against on the basis of sexual orientation. Human rights have also been in the news as a result of the British government’s plan to repeal the Human Rights Act and to replace it with a Bill of Rights.

What are human rights and where do they come from? On a recent radio discussion on the BBC the panellists seemed to agree that human rights are social inventions, values constructed from a collective wisdom. One person commented that rights have come to be regarded as inviolable and universal values about how we ought to treat each other, but that in fact they are invented by society. There are serious problems with this view, however. In his book Religion in Public Life: Must Faith Be Privatized (Oxford University Press, 2007), the philosopher Roger Trigg points out that:

The motivating idea is that the rights are unqualified. They do not exist only forcitizens of countries which are signatories to the Covenant, or which approved the original declaration. (p. 71)

The point is that it is very difficult to take human rights seriously and at the same time claim that they are social constructs. The whole point is that human rights are supposed to apply to all human beings and so are universal. Consider the right to a free trial. The idea is that such a right applies to everyone – even to people in countries which don’t recognize this right and deny it to some of their citizens. Yet if human rights are merely the result of agreements, why should they apply to countries which haven’t agreed to them? 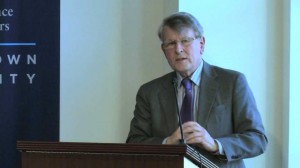 Trigg states a much more plausible view that ‘States do not create rights, but acknowledge them’ (p. 71). Just as scientists don’t create facts about the world but discover them, so states don’t create rights but acknowledge rights that already exist. And just as the refusal of some scientists to accept certain facts doesn’t mean there are no such facts, so the refusal of some countries to acknowledge human rights does not mean that there are no such rights or that they are invented.

At the core of human rights are ideas of freedom and equality. Article 1 of the UN Declaration of Human Rights states that:

All human beings are born free and equal in dignity and rights.

But why should we think that humans are either free or equal? Some people think that freedom and equality are self-evident, but as Trigg argues ‘that is largely because of the tradition which has nurtured us. In many places, such ideas are still rejected’ (p.80). He also points out that from ‘a historical point of view, ideas of equality certainly grew on Christian soil’ (p. 82). The difficulty is that notions of freedom and equality ‘form the foundations of modern democracy, but they are often wrenched from their theological context and left to stand on their own, with the unargued assumption that this does not change anything’ (p. 79). Yet this assumption is very dubious. Trigg draws attention to Nietzsche’s attacks on the idea of human equality. Nietzsche ‘was an implacable opponent of Christianity and its morality, thinking it was a device by the weak to hold back the strong.’ He believed that ‘once Christian metaphysics was removed from the scene, equality could no longer be taken for granted.’ (p. 81)

Christianity provides us with a strong justification for human freedom and equality. We are equal because we are all made in God’s image and God has given us freedom to make good choices about how to live as morally responsible agents. From the perspective of naturalism, it is much less clear what justification can be provided. Perhaps there are benefits to society in treating people as if they are free and equal, but it does not follow from that that people are actually free and equal. In fact, it’s far from clear what equality could mean from a naturalistic perspective. Clearly, some people are born into much more privileged settings than others, some have better health, greater physical strength, greater intelligence, etc. than others. If the response is that we are equal because we all ought be treated with equal dignity and that we all have equal rights, that just takes us back to where we started and leaves the question ‘Why?’

Some might claim that we don’t need to worry about the justification for human freedom and equality; can’t we just agree with Article 1 and get on with the job of making sure that people are treated with the dignity and accorded their rights? Well, of course, that is extremely important, but Trigg argues that the justification is also extremely important since these things cannot be taken for granted. He discusses the work of the philosopher Robert Audi, who believes that religion should play little or no role in public life. Trigg highlights the fact that, according to Audi, liberal democracy has to be committed to ‘the freedom of citizens and to their basic political equality’. Trigg goes on to say:

Yet if it is to be neutral about religion, it cannot be neutral about the importance ofthese objectives nor about the possibility of justifying them. Where are such idealsderived from? What is it about human beings which makes it true that they are freeand equal? Christianity has been a powerful force behind these principles … The fundamental principles of democracy may be able to gain significant support fromChristianity. Ignoring it, or even marginalizing it, could weaken the case for democracy. (p. 34)

There are certainly big issues here about the role of religion in public life and the purpose of this article is not to try to resolve them. For those who are interested, Trigg’s book gives a helpful perspective. The point here is rather to raise a question about human rights. Few will wish to deny the importance of human freedom and equality or human rights more generally, but why should we believe in any of these things at all? My suggestion is that they fit much more neatly within a Christian worldview than they do within the worldview of naturalism.