J Warner Wallace’s “God’s Crime Scene” is beautifully produced, visually engaging, delightfully accessible, practically useful, engaging, entertaining and (best of all) true. Wallace, an experienced cold-case detective, suggests that the reader approach the universe as a sleuth would approach a dead body in a sealed room. An investigating officer will want to know if the death can be explained without involving anyone else from outside the room. Was it a death from natural causes, an accident or suicide? But he will also look for signs of an intruder – evidence of an outsider. Similarly, we should ask if the natural realm can explain the evidence of design, free-will, consciousness and morality. Or is the natural world evidence of a divine outsider? Is the universe a sign of a supernatural intruder? 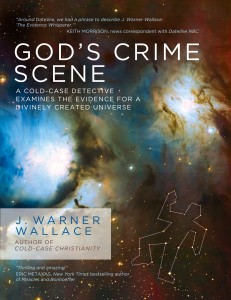 Wallace condenses a tremendous amount of research, yet keeps proceedings lively and engaging with illustrations from his time as a detective. He spends a considerable amount of time developing a case from design, examining fine-tuning, the origin of the universe and the origin of life in considerable detail. He argues that biology simply screams out for an explanation involving meaning and purpose. This seems quite convincing: scientists refer to “genes for” certain proteins and phenotypic effects, and describe how the genome carries “information” for the developing organism.[i]  Furthermore, and crucially, genes can be “misinterpreted”. As secular theorists Kim Sterelny and Paul E Griffths point out:

The idea that genes have meaning in something like the way that human thought and language have meaning is lurking in the background in many discussions of genetic information… A distinctive test of intentional or semantic information is that talk of error or misrepresentation makes sense. A map of Sydney carries semantic information about the layout of Sydney. Hence it makes sense to say of any putative map that it is wrong, or that it has been misread. Error and misrepresentation make no sense in the context of the purely causal notion of information…Strikingly, genetic information is often described as if misinterpretation made sense. So no one says that the human genome encodes the instruction “when exposed to the drug thalidomide, grow only rudimentary limbs.” [ii]

Wallace also seems to think that irreducibly complex systems like the bacterial flagellum support design by falsifying Darwinian evolution. Actually, I think that the evidence he amasses for design is so convincing that there is no need to argue against evolutionary theory. Not that Wallace devotes much time to Darwinism – I suspect he might agree that the evidence for design is so strong that the truth of contemporary evolutionary theory could not explain it away. His case is certainly compatible with that conclusion.

Wallace points out that there are certain characteristics which we reliably associate with design: sophistication and intricacy; improbability given chance; being inexplicable by the laws of nature; a direction towards some goal; a level of efficiency; informational dependency; and signs of reflection or choice. Now, he makes it clear that not all of these characteristics need to be clearly present to infer a designer; a Jackson Pollock painting might lack sophisticated intricacy and efficiency, but there is clear evidence of purposiveness.

It follows that an event need not be inexplicable by the laws of nature to provide evidence of design if other signs are present. Wallace argues that the bacterial flagellum is inexplicable on evolution by natural selection because organised complexity comes into existence incrementally and gradually on Darwinian evolution. But suppose he is wrong; suppose it could be established that Darwinian evolution (or some other physical process) could produce ‘sophisticated micro-machines’. Would that explain away the evidence for design?

Not at all; we would now have to explain why the universe contains processes which produce sophisticated micro-machines. Such a process would be an extremely complex and improbable states of affairs with valuable outcomes. So either the flagellum is designed or the process which produced it is designed.  As atheist philosopher Graham Oppy notes, theories like Darwinian evolution merely replace one improbability with another:

Whether God intervened in nature to design organisms, set nature up to produce organisms, or purposefully guided natural processes to the same end, design remains design. So Wallace is quite correct to insist that we should infer a designer from an examination of nature. Rational agents, by definition, pursue purposes and can use complicated means to achieve those ends. Furthermore, rational agents will pursue what is objectively valuable. If anything is an objectively valuable state of affairs, surely the living world is. And, as Wallace demonstrates, multiple complex factors work together in living organisms; intricate structures and highly specific laws must be in place for life to be possible. These patterns remind us of purposiveness – so there is compelling evidence for a rational creator.

God’s Crime Scene discusses human nature – morality, free-will, and the meaning of suffering – in later chapters. These break dense, substantial philosophy into healthy, bite-size meals; they also provide food for conversation, discussion and debate. While God’s Crime Scene is easy to read this is a book that is meant to be used.  If youth fellowships and small groups worked their way through God’s Crime Scene (along with Wallace’s equally brilliant Cold Case Christianity) they would gain tremendous insight into God’s word and God’s world. So, while I recommend God’s Crime Scene for Christian readers and their sceptical friends, I simply cannot recommend it highly enough for the Church and its leaders.

[i] This seems to mean more than the systematic causal dependence studied in communication theory. If the information in the genome is cashed out in terms of co-variation, we could claim that the environment equally carries information for the organism. After all two populations of the same creature with the same genetic code can develop in radically different, yet predictable, ways in different environments.  The genes would be “channeling” information from the environment; and this is not what geneticists are driving at when they refer to information in the genome. Most geneticists assume that genes carry the developmental information and nothing else does. There is no equivalent of the genetic code in an organism’s environment.

[ii] Kim Sterelny and Paul Griffiths Sex and Death: An Introduction to Philosophy of Biology (1999)  p 103