NASA’s discovery of Kepler-452b has caused quite a stir in the media, with numerous columnists referring to it as a “Twin Earth” and Twitter dubbing the planet “Earth 2.0”. When scientists at SETI remark that this is evidence that planets like Earth are common, the general impression is given that we will be making contact with ‘Little Green Men’ any day now. This is rather unfortunate. Scientists have not discovered the slightest evidence of life on Kepler-452b. Indeed, in some ways it is highly misleading to suggest that we have discovered another Earth.

Kepler-452b is 1,400 light-years away in the constellation Cygnus. It is is about 60% larger in diameter than Earth and its surface gravity is roughly twice as strong. Kepler’s mass could be five times that of Earth’s. In some ways, Venus is a closer match to Earth – and Venus is not the most hospitable of worlds. However, while we can only speculate about what the planet’s surface looks like, scientists are excited because we know that Kepler-452b could have water.

Water is essential for life – or at least, for life as we know it on Earth. So naturally, when astronomers are searching for life on other worlds, they search for worlds which are in their solar system’s “Goldilocks zone”; a region which is not too hot, nor too cold, for water. Possibly, as many as 1 in 5 Sun-like stars in our galaxy will turn out to have a ‘Goldilocks’ planet (although Sun like planets are relatively rare in the universe). 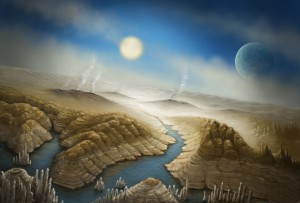 Unfortunately, merely being in the Goldilocks zone does not guarantee that a planet will have enough water to sustain life – or any water at all. Examination of the light reflected “hot Jupiter” planets has revealed water in their atmospheres. However, we have not yet isolated the light reflected from Earth-like planets; we simply do not know if they any have water. We don’t know how Earth got its water; but the most likely explanation is that Earth was seeded with water by icy meteorites, which were tugged from the outskirts of our solar system by Jupiter’s massive gravitational pull. Unfortunately for Kepler 452b, it does not seem to have a neighbouring gas giant.

And the presence of water is not sufficient for an Earth-like planet.  There are two chemical ratios which much be taken into account when asking if a planet could support life. One is the ratio of carbon to oxygen. If a planet has more carbon than oxygen, carbides on its surface would chemically break apart water to create carbon monoxide and methane rain. This would not make for particularly hospitable habitats.

We must also consider the ratio of magnesium to silicon. Earth has a slight excess of silicon. Planets with different ratios could have radically different plate tectonics. Plate tectonics,  the movement of huge plates of a planet’s surface, helped produce earth’s unique nitrogen-rich atmosphere.  It recycles the carbon dioxide locked into rocks, which is released when those rocks melt, while limiting the amount of carbon dioxide escaping into the atmosphere – a natural way of controlling the greenhouse effect. 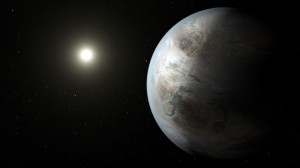 The importance of place tectonics links to the importance of our Moon. In proportion to its parent planet, the Earth’s moon is the largest of any in the Solar System. It is unusual, but without it, we most likely would not be here. Reconstructing the history of the planet, it seems highly likely that the Earth was once a planet with a thick rocky crust. Early in its history, it was struck by a planetary object which was roughly the size of Mars (an event known to astronomers as “The Big Splash”.)

The impact gave Earth its tilt (giving us the four seasons); it also stabilized the Earth, preventing the tilt from varying much over time. This prevented extreme climate fluctuations. The Earth was also left with a thin crust, which is essential for plate tectonics as we know it. The “Big Splash” also increased the speed of the Earth’s core and provided it with extra iron, which explains why our magnetic field is strong. Earth’s magnetic field is due to electrically conducting metal. This field shields life on our surface from dangerous cosmic rays.

As David Waltham concludes in Lucky Planet: Why Earth is Exceptional and What that Means for the Universe:

There are probably billions of Earth-like world’s spread throughout the Universe but most of them will not have been gifted with the moon they deserve, a moon with just the right properties to ensure minimal astronomical interference with climate. A few worlds will, however, have been lucky enough and will have a moon, a day length, a tidal history and an obliquity that sustain clement conditions for long enough to allow the rise of intelligent observers.”

There are other factors which need to be taken into account. For example, the heat of the Earth’s core is also due to an abundance of radioactive elements (like uranium) which create heat. If our solar system had formed in a different environment these radioactive materials would not have been present. The presence of nearby gas giants, like Jupiter, has prevented our planet from being bombarded by too many comets. In all, it seems that a series of very fortunate events needed to occur before our planet was ready for life as we know it.

It is also worth noting that our solar system is located in a prime piece of real estate. Ours is a “Goldilocks Galaxy”: not too close to other galaxies, metal rich, and a spiral galaxy with orderly orbits. 80% of galaxies are less luminous, and therefore less metal rich, than the Milky Way. The Galactic Habitable Zone – the region of a galaxy which is more likely to produce Earth like planets – contains no more than 10% of the stars ever formed in the Milky Way.

Computer models of the formation of our solar system suggest that similar planetary systems are surrounded by a cloud of comets. More asteroids will be shaken loose in parts of the galaxy where the stars are closer together; the more asteroids that are shaken loose nearby, the more planets will suffer strikes. Thankfully, we don’t live in a region where the stars are packed (relatively) tightly together. Many other planets will not be so lucky.

Some have suggested that there are billions and billions of planets on which intelligent life could exist. Therefore, evolution has had billions and billions of chances to produce intelligent life. But it is not at all clear that there innumerable “other Earths” to be discovered .  Given the remarkable series of even more improbable events needed for our evolution, it does seem that we have reason to believe in a designer. However, if our universe is designed by a being who values life, it is possible that we could find all types of strange creatures in odd, peculiar environments. There is no way to know for sure; indeed, the only thing we can be sure of is that God’s creation will surprise us.

All the more reason, then, to explore God’s creation. The work started by NASA should excite us, not because we will contact ET, but because we know whatever we find will be strange, thrilling and beautiful. If life is not the outcome of chance and time, the universe could be packed with more beauty and wonder than we could possibly imagine.

Lucky Planet: Why Earth is Exceptional and What that Means for the Universe by David Waltham