End of the Cold War

1) The Collapse of Communism (an overview) 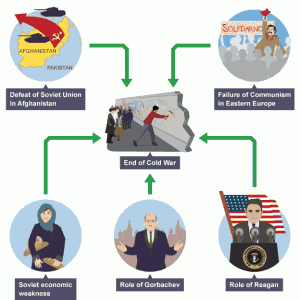 3) Failure of Communism in Eastern Europe

5) The Role of Gorbachev

6) The Role of Reagan

Detente and the Afghanistan War

The 1962 Cuban Missile Crisis brought the world on the brink of nuclear war. To avoid this, a telephone hotline was set up in the White House (USA) and the Kremlin (USSR). In 1963, the two countries signed a treaty to stop testing nuclear weapons.

Detente- A Period of increasing Cooperation

The USSR could not afford to continue making so many nuclear weapons while the USA was trying to end the expensive Vietnam War. In 1972 President Nixon and Premier Brezhnev held peace talks and agreed to limit their nuclear weapons when they signed the Strategic Arms Limitation Agreement (SALT 1). In other agreements, borders were made clear and there were commitments to human rights. China also wanted to ally with the US after its relationship with the USSR turned sour and China feared and American military invasion.

The detente period ended as the Soviet Union tried to take Afghanistan. The USSR got bogged down trying to take the country. US distrust of the USSR increased and President Carter issued the Carter Doctrine which warned outside powers from trying to gain control of the oil-rich Persian Gulf. The USA then gave weapons and training to the Afghans and boycotted the Moscow Olympics, and in turn, the Soviets boycotted the Los Angeles Olympics in 1980 and 1984, respectively. The USSR gave up trying to take Afghanistan in 1988.

The war in Afghanistan and election of anti-communist Ronald Reagan ended detente. He called the Soviet Union an “Evil Empire.” Reagan wanted to show off new weapons like the Pershing and Cruise missiles which could be fired from almost anywhere. The US also started developing the Strategic Defence Initiative (SDI) which would use lasers to shoot down missiles from space.

In the 1970s, Poland’s living standards rose, but later in the decade it suffered from foreign debt. In 1980 Lech Walesa led workers protesting against food prices with some success. They set up their own trade union called Solidarity. They wanted the right to strike and to be involved in major decisions affecting their living and working conditions. By 1981, Solidarity, led by Lech Walesa, was anti-communist, had nine million members, and was backed by the Catholic Church. The Polish government was worried about Solidarity and the USSR.

The Polish army leader Jaruzelski, backed by the USSR, took control of the country and declared martial law. Lech Walesa was imprisoned and the Solidarity movement was banned. In 1988 there were strikes nationwide which forced the government to negotiate.

The arms race was so expensive that it made living conditions in the Soviet Union worse. Farming was inefficient; so much so that millions of tonnes of grain was imported from the USA. The corrupt government was unable to give people proper living standards, and the war in Afghanistan cost billions and 15,000 Soviet lives.

In 1985 Gorbachev became head of the Communist Party. He was much more open to the West and introduced two new policies- Glasnost and Perestroika. Glasnost meant new freedoms and thousands of political prisoners were released, people learned of Stalin’s horrible actions, free speech was allowed, and military conscription would be abolished. Perestroika dealt with the economy and Gorbachev aimed to make production more efficient. He was unable to deal with the widespread corruption.

In 1987, the USA and USSR agreed to remove all medium-range nuclear missiles from Europe. Gorbachev also decided to reduce the weapons stockpile and size of the military. Gorbachev met with Reagan a few times and also ended the Afghan War. Most importantly, Gorbachev abandoned the Brezhnev Doctrine and said that Eastern European countries could make their own choices without Soviet control.

End of the Soviet Union

Hungary opened its border with Austria and Poland held free elections won by Solidarity. Many East Germans crossed into West Germany, while the government collapsed in Czechoslovakia after anti-communist demonstrations. A revolution happened in Romania that overthrew the cruel dictator Nicolae Ceausescu who was executed on Christmas. In 1990 Germany was reunified and a year later the Warsaw Pact ended.

Many nationalities in the Soviet Union wanted independence like Latvia, Lithuania, and Estonia. Gorbachev tried to stop nationalist sentiments in those areas with military force but gradually lost control.

Boris Yeltsin was elected President of Russia who, as an opponent of Gorbachev, became very popular. He sought the end of the USSR, which led to a crisis.

The communist leaders feared losing power so a military group tried to seize power by capturing Gorbachev. New President Yeltsin resisted and rallied the people, and with the support of the army, the coup failed. The Soviet republics became independent and Gorbachev was forced to resign ending the USSR.