In the 1960s Yale social psychologist Stanley Milgram carried out an experiment to measure the willingness of participants to obey authority figures. The basic idea was to see how far the participant (in the role of a teacher) would go in administering electric shocks to a stranger (in the role of a learner who was actually an actor pretending to receive the shocks), when ordered to do so by the experimenter. The shocks started at 30 volts and increased by 15 volts each time up to a maximum of 450 volts and were given when the learner gave wrong answers to questions. Although many participants expressed reservations, some becoming very stressed and angry with the experimenter when the learner pretended to be in severe pain, most (65%) nevertheless continued until they reached the maximum voltage.

Milgram’s original study was motivated by the desire to understand whether Adolf Eichmann, whose trial took place shortly before Milgram’s study, and other Nazis could have simply been following orders. Interpretations of Milgram’s results are hotly debated and Eichmann was more brutal and ideologically driven than the ‘banality of evil’ thesis allows.  However, one of Milgram’s conclusions seems sound and important: “Ordinary people, simply doing their jobs, and without any particular hostility on their part, can become agents in a terrible destructive process.” This more recent study suggests that ordinary, nice, hard-working people might be more likely to do terrible deeds when ordered to do so.

All of this seems consistent with the Christian analysis of the human condition. Some people ask why Christianity is so obsessed with sin and the need for God to put things right. Couldn’t we just put things right ourselves? Wouldn’t better education and social conditions enable us to put our differences aside and create a better world for everyone? And, besides, if I don’t do anyone any harm, why does Christianity insist that there is something wrong with me and that I need to be forgiven? Shouldn’t God just accept me if I do my best?

Christianity teaches that the problem runs much deeper and the psychological studies seem to agree. In Christian terms, we have rebelled against God and so cut ourselves off from the only source of goodness. Even nice, conscientious, agreeable people are in this position and so it shouldn’t surprise us that in certain circumstances they are capable of doing terrible things. As C.S. Lewis put it:

If you are a nice person – if virtue comes easily to you – beware! Much is expected            from those to whom much is given. If you mistake for your own merits what are          really God’s gifts to you through nature, and if you are contented with simply being   nice, you are still a rebel: and all those gifts will only make your fall more terrible,   your corruption more complicated, your bad example more disastrous.[1] 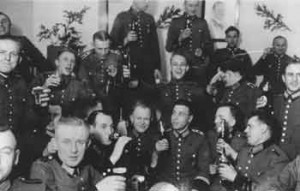 This entry was posted in Quick Thoughts and tagged Christianity and Science, Popologetics, Sin. Bookmark the permalink.