What Rihanna Knows & the Intelligentsia Doesn’t

Rihanna’s pop video for “B**ch Better Have My Money” is a charming little revenge fantasy which updates the American dream for a younger, more nihilistic audience. Once upon a time, American audiences were taught that determination, character and a little luck would open the door to fame and fortune. Unfortunately, popular culture has since learned that white patriarchy runs the United States. Today, a poor guy or gal can’t get an even break without a rich white banker stripping them of their assets. Virtue remains its own reward, but it pays poor dividends and there aren’t any fringe benefits. It’s best to do your enemies before they do harm to you; then vanish, before there are any consequences.

So Rihanna’s short film reminds us that America remains the land of the free: exploitation and violent revenge are equally available to all, regardless of creed, class, gender or colour. According to every critic I have read, the film’s plot runs as follows: when an accountant inveigles Rihanna out of a large sum of money, she and her posse kidnap the accountant’s girlfriend (played by supermodel Rachel Roberts).  This poor little rich girl is stripped, beaten, tortured, drugged and eventually drowned. Rihanna then kidnaps the accountant, then tortures and dismembers him. As you do. She ends the video bathed in her victim’s blood and cash.

Why does Rihanna respond to embezzlement with sadistic torture and murder? The film does not say; but I’m reminded of some lines penned by WH Auden

That girls are raped, that two boys knife a third,

Were axioms to those who had never heard

Of any world were promises are kept,

Or one could weep because another wept.

But I digress. Rihanna had creative control and co-directed, so she bears responsibility for a film which has caused a great deal of controversy and endless, agonised, intellectual debate.  Is the video misogynist? After all, the male accountant isn’t stripped before the camera. Is Rihanna racist? The accountant and his girlfriend are white, Rihanna and her girl-friends are not. Is the film an ironic homage to Tarantino’s and Frank Miller? Or is its depiction of triumphant, female blood-lust a celebration of feminism? 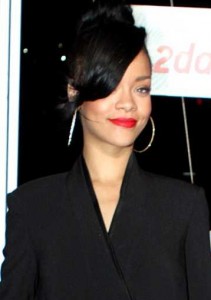 Who knows? Who cares? Rihanna certainly doesn’t. She isn’t selling political commentary or artistic freedom and she knows that even simple sex is past its sell-by date. Rihanna and her marketing team know that if you really want to move product, you offer sensations. Sensuality no longer suffices to get the heart racing; entertainment must provide something more visceral. Horror, fear, disgust, rage, pity, blood, gore, lust, greed and vengeance must be compressed into one short, shocking audio-visual experience if you want to hold a viewers attention for seven minutes!

But isn’t it all such a laugh? Isn’t it funny how we take a pop-video so seriously? After all, who are we to say that its wrong to find theft, rape, torture and murder amusing? Watching Rihanna’s film is unlikely to cause anyone to commit a crime; so no harm, no foul. Once upon a time, we believed in moral absolutes, in right and wrong, in good and evil. We believed that wickedness could seduce and corrupt; that our vices should not be discussed, never mind celebrated. There were lines that a wise person did not approach, never mind cross.

But this is the age of the consumer. There are no moral lines any more; we are ruled by our feelings: by sensation and sentiment. If Rihanna killed her lover and their children in her next video she would not be condemned, for there is no accepted code which can condemn her. Dozens of columnists would spring to her defence, citing Euripde’s Medea as a possible inspiration and praising Rihanna for exploring the psyche of the modern businesswoman in a man’s world. With enough education, you can become stupid enough to miss every obvious truth; you can learn to make an excuse for anything.

Yes, Rihanna’s video only depicts a fantasy; and haven’t we all idly imagined terrible harms befalling those who injure our pride? But  some of our fantasies should disturb us. Why do we wish for such brutal, vicious vengeance? Why is the punishment we wish on those who wrong us out of all proportion to the harm we have suffered? We should be ashamed and alarmed. A part of us wants to humiliate and then eviscerate our enemies; something in us thirsts for blood. The rules of civilization keeps these emotions in check; self-interest demands that we pay lip-service to altruism. But what would we do if all the rules were gone? What would we become if no one was watching?

Christians know that blood-lust is a mark of our sinfulness; a sign that something is morally and spiritually wrong with us. Rihana is neither ashamed nor alarmed. But she understand something that her cultured admirers do not; that the only line that really counts today is the bottom line: the profit margin. She is at ease in the vapid nihilism which rules our culture and she will exploit it to the full. She’ll market herself mercilessly. Whether we approve or disapprove, she knows we have her money.