The Resurrection: What Paul Saw

The testimony of the apostle Paul for the resurrection of Jesus Christ is often overlooked or misinterpreted. Some allege that Acts and Paul’s letters suggest that Paul had a vision or hallucination on the road to Damascus. Others argue that Paul did not believe that Jesus physically rose from the dead; rather, Paul believed that Jesus survived in spiritual form. Finally, it is alleged that Paul’s testimony is too far removed from events to be reliable. In fact, Paul’s testimony is that Jesus rose physically from the dead. This was a highly unusual belief, to say the very least, and it demands some explanation. When added to the evidence for the empty tomb and the testimony of the first Christians, Paul’s statements about the risen Christ form part of a powerful cumulative case for the resurrection.

In 1 Corinthians 15 Paul cites Peter and the Twelve as witnesses to this resurrection:

This is an extremely important piece of evidence. The argument of the paragraph depends on the importance of eyewitness testimony. Furthermore, when Paul talks about “receiving” and “passing on” this message, he is using technical language for memorizing and passing on oral traditions. The Corinthian Church was founded about 49/50AD; and we know from the book of Galatians that Paul’s message had the approval of the mother Church in Jerusalem. Paul learned this tradition from the apostles in Jerusalem soon after the events of Easter.

In their textbook “The Historical Jesus: A Comprehensive Guide”, Gerd Theissen and Annette Merz explain why historians place so much weight on this passage:

The analysis of the formula tradition about the resurrection of Jesus allows the following conclusion: a tradition in 1 Cor 15v3b-5, which goes back to the events themselves, attests appearances to both individuals and groups. The credibility of this tradition is enhanced, because it is in part confirmed by the narrative tradition, which is independent, and because in the case of Paul we have the personal testimony of an eyewitness who knew many of the other witnesses…There is no doubt about the subjective authenticity of these testimonies; i.e they come from people who attest an overwhelming experience in good faith. The appearances to individuals are particularly illuminating. Peter had denied Jesus. Paul had persecuted his followers. James (possibly) shared the scepticism of other members of his family towards Jesus.

But doesn’t 1 Corinthians 15 teach that Resurrection bodies are physical rather than spiritual?

Anyone studying this text in any depth begins to feel a great deal of sympathy for Bible translators. Paul contrasts “a spiritual body” (soma pneumatikon) with “a soulish (psychikon) body,”not with a “physical body.” Which leaves the modern reader in something of a muddle; what on earth is the difference between a “soulish body” and a “spiritual body”? How can bodies, “sown” into graves be made out of “soul”? The short answer is that they can’t; Paul was not comparing what our bodies are now made of to what resurrection bodies will be made of. So what did Paul mean?

The natural (psychikos) man does not accept the things of the Spirit of God, for they are folly to him, and he is not able to understand them because they are spiritually discerned. The spiritual (pneumatikos) man judges all things, but is himself to be judged by no one

Another argument forcefully made by NT Wright: If the Paul merely had “visions” of Jesus in heaven then he could certainly have founded a movement that honoured Jesus teachings.  But Jesus had been executed under the titulus “the King of the Jews” – the Roman’s point being that this crucified man was no king.  Yet Paul believed, and preached, that Jesus was Christ. That is, Jesus was the Messiah, the King. How can you believe and preach a dead messiah? The answer is you can’t. Yet “resurrection” meant more that restored life to the Jewish people. It also meant that God had judged you and vindicated you. If Jesus was resurrected it meant that God had accepted his claim to be Israel’s King (Romans 1 v3-4). A Messiah couldn’t be an apparition, a shining star, or a spiritual experience; the problem of a dead Messiah is only resolved if the dead Messiah is resurrected. Rising from the dead in any other way won’t do.

But doesn’t the book of Acts teach that Paul merely had a vision of a heavenly figure, as opposed to a physically embodied person? NT Wright urges caution:

…a surprising number of people with only limited biblical knowledge have a clear mental picture of what they think happened on the road to Damascus. Paul was riding on horseback when a blinding light suddenly appeared, knocking him off the horse and onto the ground.” The Resurrection of the Son of God p375 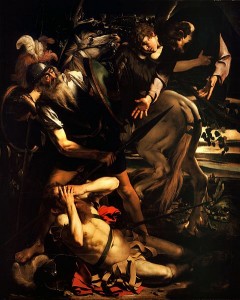 This image owes much to paintings by Michelangelo and Caravaggio; it owes little to the book of Acts, which does not mention a horse, and does mention an appearance by Jesus (who is notably missing from both paintings). The book of Acts tells the story of the Damascus road three times (Acts 9, 22&26). 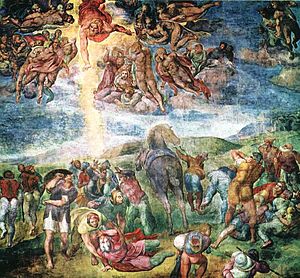 Acts 9 Meanwhile, Saul was still breathing out murderous threats against the Lord’s disciples. He went to the high priest 2 and asked him for letters to the synagogues in Damascus, so that if he found any there who belonged to the Way, whether men or women, he might take them as prisoners to Jerusalem. 3 As he neared Damascus on his journey, suddenly a light from heaven flashed around him. 4 He fell to the ground and heard a voice say to him, “Saul, Saul, why do you persecute me?”5 “Who are you, Lord?” Saul asked.“I am Jesus, whom you are persecuting,” he replied. 6 “Now get up and go into the city, and you will be told what you must do.”7 The men travelling with Saul stood there speechless; they heard the sound but did not see anyone. 8 Saul got up from the ground, but when he opened his eyes he could see nothing. So they led him by the hand into Damascus. 9 For three days he was blind, and did not eat or drink anything.

Acts 22 6 “About noon as I came near Damascus, suddenly a bright light from heaven flashed around me. 7 I fell to the ground and heard a voice say to me, ‘Saul! Saul! Why do you persecute me?’8 “‘Who are you, Lord?’ I asked. “ ‘I am Jesus of Nazareth, whom you are persecuting,’ he replied.9 My companions saw the light, but they did not understand the voice of him who was speaking to me.10 “‘What shall I do, Lord?’ I asked.“ ‘Get up,’ the Lord said, ‘and go into Damascus. There you will be told all that you have been assigned to do.’ 11 My companions led me by the hand into Damascus, because the brilliance of the light had blinded me.

Acts 26v 13 About noon, King Agrippa, as I was on the road, I saw a light from heaven, brighter than the sun, blazing around me and my companions.14 We all fell to the ground, and I heard a voice saying to me in Aramaic, ‘Saul, Saul, why do you persecute me? It is hard for you to kick against the goads.’15 “Then I asked, ‘Who are you, Lord?’“ ‘I am Jesus, whom you are persecuting,’ the Lord replied.16 ‘Now get up and stand on your feet. I have appeared to you to appoint you as a servant and as a witness of what you have seen and will see of me.

As Acts 26 v 16 makes clear, the book of Acts testifies that Paul saw Jesus on the road to Damascus.  A blinding light stopped Paul in his tracks; the source of the light was heaven, however, not Jesus. And we must be absolutely clear – Acts does not portray the resurrected Jesus as an ethereal being of light.

The text is clear that Jesus appeared to Paul alone; yet Paul’s companions saw the light. The light functions to stop Paul in his tracks; it is a sign of divine judgment. It prevented Paul’s fellow travellers from witnessing Jesus. Then it was gone. Acts is not describing a private vision or a subjective experience. Paul’s companions saw the light (22v9, 26v13); they heard the voice (9v7), although they did not understand who was speaking or why(22v9). Paul is clear in 1 Corinthians and Galatians 1 – testimony that precedes the book of Acts by some decades – that he witnessed the same Jesus as the other Apostles. Acts gives us no reason to doubt him.

This entry was posted in Historical Jesus, Quick Thoughts and tagged Evidence for God, Eyewitness Testimony, Jesus. Evidence for the Resurrection, Paul, What Paul Saw. Bookmark the permalink.