The Pros and Cons of Conscience Clauses

Now that a Judge has decided that Asher’s bakery were guilty of breaking discrimination laws for refusing to bake a cake with a “Support Gay Marriage” logo, attention will return to Paul Givan’s proposal that Northern Ireland’s equality legislation be amended to include a “conscience clause”. Passions may run a little high over the next few days, so it is worth taking a moment to reflect on

The last thing that we need at the moment is inflammatory language and knee-jerk reactions. While recognizing the need to protect religious freedom, we do not think that it is good or wise to produce legislation which merely exempts some businesses from equality legislation which pertains to sexual orientation. This runs the danger of pitting two narrowly defined interest groups against one another in a zero-sum political battle.

Furthermore, and crucially, the scope of Mr. Givan’s proposed clause is much too narrow to appropriately value the role of conscience in the public square; nor is it likely to create the freedoms necessary to manifest one’s religious or philosophical beliefs in a multi-cultural society. Freedom of conscience is important enough to merit a much broader and much more serious conversation. And we must also be very clear – we do not want legislation which could be used to refuse goods or services to anyone on the basis of their sexual orientation, or their religion, culture or political beliefs. This would undermine the very freedom we wish to create. 1

There is a case for legislation which would allow organisations and firms to refuse services if doing so would offend informed, sincere religious beliefs.   The Economist  has noted that:

[i]f religious conservatives in Northern Ireland try to use the gay-cakes affair to bring about a general rolling back of equality legislation, they will surely fail. But if they… merely seek to prove that there are some limited circumstances in which conscience should prevail, that may have some traction.

The churches, mosques or synagogues are the proper places for people to practise or discuss their religious convictions, and that is where such debates should remain.” 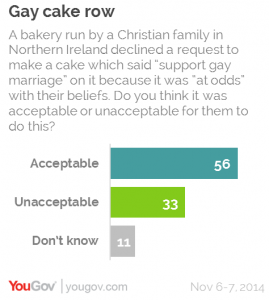 Such views are rather typical of naive secularism. The problem, of course, is that religion normally prescribes how believers should act in secular affairs; few religions can be practised by consenting adults in private. Ninian Smart’s famous  scheme for studying religion draws attention to its seven dimensions- the experiential, the narrative, the doctrinal, the material, and crucially for our purposes, the practical, the social and the ethical. All of the great world religions will affect a person’s social identity and expect a person to behave in a distinctive manner. This is simply what “religion” entails.

So, in a pluralistic society, if a person is religious then that person might have different ethical beliefs and social practices than their neighbours. If we cannot make space for those beliefs and practices, then we have restricted their religious freedom. We do not solve the problems of religious pluralism by telling religious people to keep all of their inconvenient beliefs locked away; no community can thrive in the closet. When we privatize religious belief we tell it that it does not belong in a civilised, modern society. Effectively, we discriminate against it: it is that simple and that wrong.

In fact, if the only point of conflict between the sacred and the secular was the issue of sexual orientation then there would be little need for legislation which protects religious freedom. However, evangelical Christians have many beliefs which disturb and upset secularists. On the issue of abortion, we strongly tend towards the pro-life position. We believe that one religion, and one religion alone, is true. We believe that proselytization is a religious duty; that every human being should be informed that he or she is a sinner who needs to repent. It is easy to portray us as a benighted, unenlightened, intolerant bunch on a wide range of issues – therefore, it would be tempting to use legislation to shut us up.

We are also keenly aware that many Hindus, Muslims, Sikhs, Jews, Baha’i, and Mormons also have beliefs and practices which set them apart, and can be subjected to religious intolerance and discrimination. And it is not only the religious who can fall victim to religious prejudice: humanists can be treated with suspicion and hostility by the devout. Different religious convictions lead to different morals, customs and practices, and this can lead to public disagreement. However, so long as there are means for peacefully and creatively defusing the inevitable tension, we believe such disagreements can be good for society. After all, democracy depends upon debate, disagreement and compromise.

Different world-views suggest radically different answers to practical problems; being confronted by different philosophies should lead policy makers to reconsider their own prejudices and biases. At the very least, it should prompt political leaders to justify their assumptions and presuppositions to a critical audience. Democracies also depend upon the scrutiny of their citizens: therefore, they must respect the intrinsic worth of each person’s judgement. An open society will want to make room for a principled pluralism – and, therefore, freedom of conscience – to maximise the number of citizens who believe that they have a stake in society.

It is always a terrible thing to coerce someone to do what she believes to be wrong. So we need some means of protecting what Os Guiness calls “soul freedom”:

…Roger Williams’s magnificent term for religious freedom. It stands over against those who confuse religious freedom with mere toleration, or shrink it to mean only the freedom to worship. It challenges those who view it simply as “freedom for the religious,” or think that when religion is dismissed, religious freedom can be ignored…[it] is “the right to adopt, hold, freely exercise, share, or change one’s beliefs subject solely to the dictates of conscience and independent of all outside, especially governmental control.” Seen this way, freedom of religion and belief (which covers secularist worldviews too) is essential because it involves nothing less that our freedom to be human.

Government should only restrict soul freedom when it has a compelling interest to do so, and does so by the least restrictive means. Malachi O’Docherty seems concerned that an open public square might put us on a slippery slope to anarchy: after all, “once we start legislating to allow religious exemptions and other mad laws will suggest themselves.” Yes, we rather imagine that all sorts of crazy ideas will be suggested. None of those ideas need be taken seriously. The law could not tolerate religious behaviour which undermined religious freedom: that is, it need not tolerate behaviour which is wilfully absurd or which prevents individuals from pursuing the truth without fear of harassment. 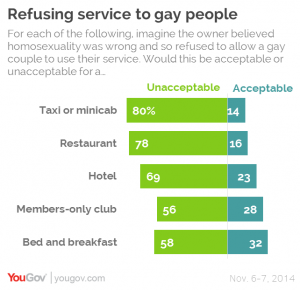 To preserve religious freedom, a citizen should only be made exempt from legislation when that legislation dictates that he or she must act against a central aspect of their faith or world-view. To be exempted, a claimant would need to demonstrate that legislation substantially burdens a sincerely held belief; they would also need to show that this belief plays an important role in guiding their community or tradition. Furthermore, a government should be able to compel citizens to go against their consciences when the government can demonstrate that it has a clear, compelling interest in doing so. Every government has a clear and compelling interest in upholding its criminal code, for example, or to collect taxes.

To take a crude example, a Christian could not claim the right to violently beat their children because the Bible says “spare the rod, spoil the child.” This is not only because such behaviour would be in breach of the nation’s criminal code; it is also because the government has an interest in promoting and protecting soul freedom and soul freedom cannot exist where individuals are subject to intimidation. Furthermore, “sparing the rod” is hardly a central Christian belief. It is a proverb, not a command. It is not part of Jesus’ teaching, or the teaching of the apostles. It does not feature in creeds or confessions.

A Christian could not claim the right to refuse to serve a customer simply because of that person’s sexual orientation or religion or nationality: it may be defamatory to suggest that traditional Christian ethics call for that sort of discrimination. In any case, the government would have a compelling interest to intervene if any subsection of society faced widespread discrimination. But there is no compelling state interest in forcing religious citizens to provide goods and services which promote or condone beliefs they strongly disagree with; especially when asking a customer to seek the goods or services elsewhere does not create a substantial burden for the customer. 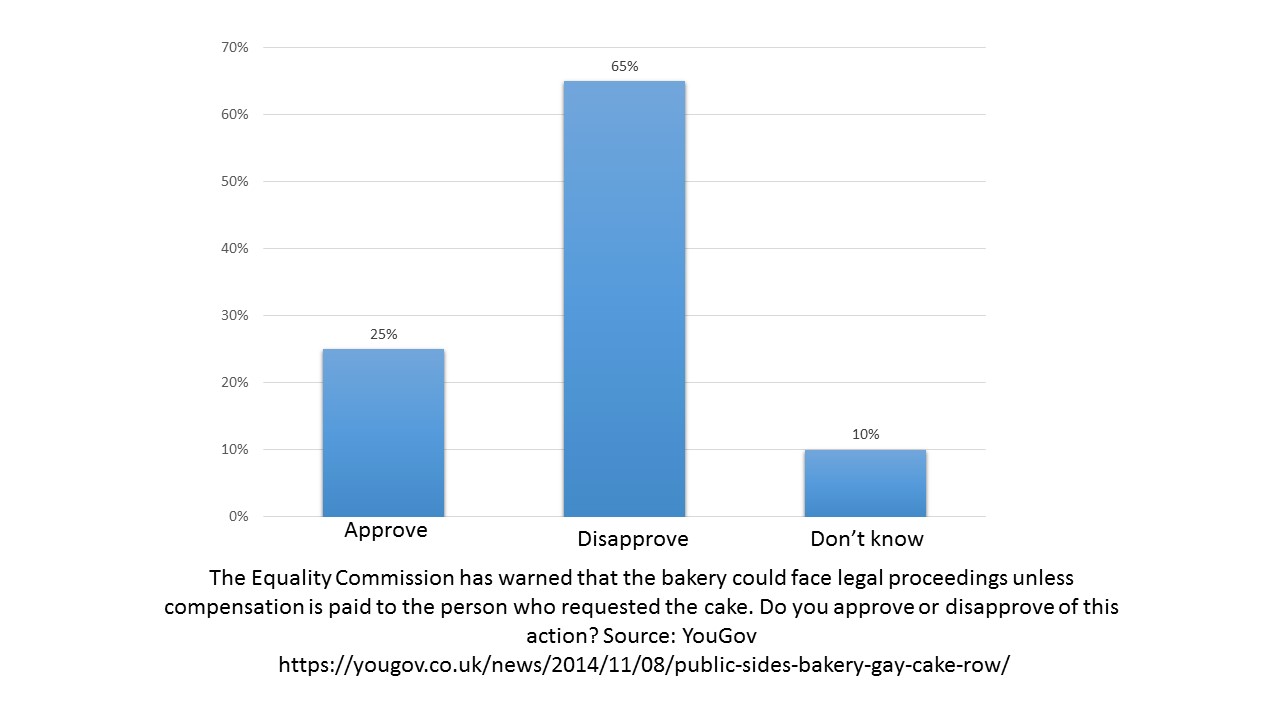 The Belfast Telegraph’s editorial conceded that:

We recognise that even though the secular world continues to gain ground apace, religion plays a hugely important part in very many people’s lives in Northern Ireland.”

So we’ve simply outlined the sort of society we would like to live in: one governed by a principled pluralism and not by secularist orthodoxy.  We merely wish to argue that some room must be made for deep religious and philosophical disagreement in a civil society. We’re not concerned with party politics or electioneering at Saints and Sceptics (nor are we interested in forming a “moral majority”). Others can debate who we should and should not vote for in upcoming elections.

But a reasonable person can doubt that secularization is progressive, universal and inevitable. Humans naturally seek meaning and transcendence, community and belonging. For that reason, religion will always be part of human experience. The arguments for the rationality Christian faith are (at least) as good as those against it. Modernity was meant to lead to the death of religion; it has certainly led to the growth of the “non-religious”. However, across the globe, orthodox religion is thriving; even in the academy, religious scholars remain as accomplished as their secular peers. Secularization is stumbling; it would be a shame if secularists become more strident in response.

__________________________________________________
1 To be clear: a state does not act with respect for personal freedoms and diversity, or properly value liberty, justice and dignity, if it requires citizens, whether they are acting in a commercial capacity or not, to produce material which directly conflicts with their core beliefs and values – especially if that material can easily be acquired without violating anyone’s conscience. But we also believe that there are many, many other areas of public life in which different faiths and secular beliefs can come into conflict. There should be some legislation which gives some level of protection to religious and philosophical belief in principle and in general.