My Kingdom is not of this World, said Jesus.

And when He spoke those words, His nation, Israel, was occupied by Rome, and ruled by a hedonistic ‘king’, both of which oppressed and abused the people.

Jesus’s kind of thinking has led some to believe that Christianity is of no earthly use; has nothing to say about the present; and tends towards the impractical. Nothing, however, could be further from the truth, for Christianity changes the hearts, minds and actions of those who live ‘here and now’. Furthermore, its principles and values infuse the lives of the who have come to believe in the King and the Kingdom of Heaven, and they apply its values to the world they can see, and in which we all live in.

END_OF_DOCUMENT_TOKEN_TO_BE_REPLACED

Posted in Quick Thoughts | Comments Off on Unborn Lives Are More Important Than National Identities. 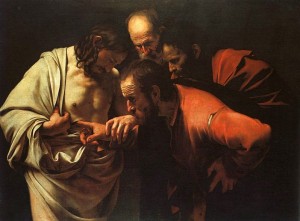 Is that what was really going on here? It seems not. John states just after this incident that the very reason he wrote his gospel was so that people would believe that Jesus was the Son of God – not blind faith, but faith presumably based on the evidence of his account. The clear implication then is that Jesus thought Thomas was being unreasonable in his scepticism, that based on the evidence he had available to him he should have believed in the miracle of the resurrection.

END_OF_DOCUMENT_TOKEN_TO_BE_REPLACED

Posted in Historical Jesus | Comments Off on Believing Thomas