Is the Size of the Universe Evidence for Atheism?

A Critique of the “Argument from Scale”

The critic might also be criticising the argument from fine-tuning: that various features of the universe are ‘just right’ for the existence of stars, galaxies and life itself; had they been slightly different the human race could not exist. If the universe was finely-tuned to produce life and humans, why is so much of it lifeless?

So what makes me think the size of the universe leads to atheism? [It is] damaging when it comes to an omnipotent God who supposedly created the universe for the specific purpose of gaining the affections of people on this lone planet of ours. If this is what he desired (for some irrational egotistical reason) he could have simply created us on a flat disk in a much smaller universe like the one the ancients believed existed.

Two counter-objections immediately spring to mind. First, it is true that the universe might seem to be an incredibly inefficient machine for making humans and animals; after all, it seems to waste a lot of space and time in the process. But an artist rarely paints with a single goal; a painting might aim to be beautiful, truthful, thought-provoking and many other things besides.
So, take a look at Peter Brueghel’s “Landscape with the Fall of Icarus” below: 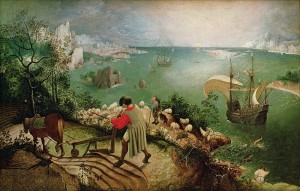 The death of Icarus is easy to miss; it only takes up a fraction of the canvas (on the bottom right hand corner, behind the ship). Yet we can hardly conclude that his story was unimportant to Brueghel or to his painting! Indeed, Brueghel was trying to point out that a multitude of distractions allow us to overlook great tragedy. Furthermore, Brueghel had other goals than commenting on the story of Icarus: the representation of the landscape, of everyday life and nature, and the use of colour, light and darkness to create a beautiful image. Icarus is important to the painting; but there is more to this work than Icarus.

Similarly, the production of humans and animals need not be the universe’s only purpose. It is quite majestic and beautiful in its own right; exactly the qualities that would give a creator a reason to bring it about. Much of the fine-tuning required to make life possible also makes stars, solar systems  and galaxies possible. The addition of animals and humans simply adds exquisitely beautiful and wonderful creations to a marvellous universe.

Second, there are good reasons for thinking that the vastness of the universe is related to the fine-tuning of the universe for life. Sir Martin Rees, the Astronomer Royal writes that:

The very hugeness of our universe, which seems at first to signify how unimportant we are in the cosmic scheme, is actually entailed by our existence! This is not to say that there couldn’t have been a smaller universe, only that we could not have existed in it.

The reason for this is that even before our sun and its planets could form, other stars had to generate carbon and oxygen necessary for life. Given the time required for this and the expansion of the universe, a vast universe is needed for our existence. So arguably this provides a further way in which the vastness of the universe provides evidence for God.

In fact, we’d say the vastness of the universe, along with its order and beauty, provides evidence for the existence of God. As it says in the book of Psalms, ‘The heavens declare the glory of God; the skies proclaim the works of his hands. There is no speech or language where there voice is not heard.’

Nicholas Everitt maintains, however, that the scale of the universe is not predicted by Christian theism, and counts as evidence against it. He sets his case out thus:

It is true that the twentieth century brought the first substantial evidence of galaxies beyond our own; indeed, the number of galaxies is beyond imagination. It is simply not true, however, that Christians of previous generations believed that the universe had been created on a “human scale”! Indeed, they expected God to create a vast universe! Pascals in his Pensees wrote:

The entire visible world is only an imperceptible speck in the ample bosom of nature. No idea can come close to imagining it. We might inflate our concepts to the most unimaginable expanses: we only produce atoms in relation to the reality of things. Nature is an infinite sphere in which the center is everywhere, the circumference is nowhere. Finally, it is the greatest sensible mark of God’s omnipotence, that our imagination loses itself in that thought.” Pensees no. 72 (emphasis ours)

And in Book VIII of John Milton’s Paradise Lost, the angel Raphael tells Adam that he lives in a universe of “distance inexpressible by numbers that have name”. Raphael sees a lesson in this for mankind:

“And for the heavens wide circuit, let it speak,

The Maker’s high magnificence, who built,

So spacious, and His line stretched out so far,

That man may know he dwells not in his own

An edifice too large for Him to fill,

Lodged in a small partition and the rest

Ordained for uses to his Lord best known”

But could the sceptic argue that the relative size of the Earth is evidence that human being have no significance? It’s difficult to see how. We have already noted that life could not have developed in a smaller universe. And evidence that the universe was  fine-tuned for life hints that humans were not an afterthought for the creator. We might also wonder why anyone should attach so much importance to size.  As Raphael counsels:

Though in comparison of Heaven so small

Nor glistering may of solid good contain

More plenty than the sun which barren shines”

Life contains just as much material for wonder and awe as supernovae and quasars. There is more organised complexity in the average worm than there is in the average solar system. Indeed, humans in particular have a significance that cannot be captured by mere measurement. Not only can the human mind perceive and comprehend vast reaches of physical space; it  can imagine universes that have never existed. It is its own “kingdom of infinite space.”

Indeed, calm reflection on the revelations of cosmology confirms Christian doctrine. Humans are not gods; nor are we insignificant dust. The Creation was not given for us alone; yet we are at home in it. We are fragile but precious creatures. But what of the incarnation and atonement? Are we really to believe that the Son of God would become fully  human to suffer and die for a species so weak, young and few?

To ask that question is to miss the point entirely.  Bethlehem and Calvary were not evidence of our significance. They are evidence of God’s love. And wouldn’t we expect a God of infinite love to do unpredictable acts for those who cannot merit them?