‘Never discuss religion or politics’; it’s an age old phrase which will be familiar to many, and one which has sought to give advice about how we should behave in ‘polite society’ (whatever that is in the 21st Century). 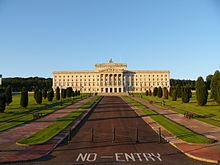 To speak of being Protestant and British, or Catholic and Irish was very often more than a crude stereotype. Furthermore, the politics of ‘left’ and ‘right’ was very often relegated to second place by the more important question of nationality.

In Ireland the issues of religion, politics and nationality have always been bedfellows and have always affected people’s voting patterns, until, perhaps, now.

This time, however, something has changed, and that something is an increasing ‘Protestant/Unionist’ and ‘Catholic/Nationalist’ population who do not identify as Christian, and who are, therefore, more liberal on social/moral issues. In this sense, it would appear that Northern Ireland has ‘caught up with’ the rest of the morally liberal West. And for the first time, in a very long time, if not for the first time ever, questions of sexuality, gender, marriage and abortion have been central in election debates – and perhaps one more than any other has been to the fore, that of abortion.

Northern Ireland’s abortion law is strict, permitting abortions only in very specific circumstances [i], and the footnoted article provides an overview of the issues related to the current debate.

Of particular interest to this article, however, is that the Northern Ireland Assembly has the power to change the law – abortion is a ‘devolved’ issue – and as a result, political parties and individual candidates seeking election to the Assembly have either been asked for, or have been making their views known.

In short, abortion is now not only a ‘devolved issue’, abortion has become an election issue – something which has been noted in Northern Ireland’s local media.

The Roman Catholic has already published its view; it is straightforward, direct and easy to understand, and raises the possibility of people voting differently.

On reading it, one might wonder how many Christian Protestant/Unionist voters would be inclined to agree.

Or to put the question another way, in a society in which voting patterns have so often been determined by ‘cultural’ or nominally religious labels and national identity, has the time come for voting Christians to put the protection of the unborn child ahead of their national identity?

[i] “Abortion is possible but only in very specific circumstances The law is far stricter than in the rest of the UK. In 1945, the Infant Life (Preservation) Act, which permits terminations to preserve the life of the mother, was extended to Northern Ireland. Guidelines issued in March by the Northern Ireland Executive state that access to abortion is only permitted if a woman’s life is at risk or there is a permanent or serious risk to her mental or physical health.

Fatal foetal abnormalities, rape and incest are not circumstances in which abortions can be performed legally. The High Court recently ruled that this was incompatible with the human rights of women, but the law can only be changed by legislators.”