“Almighty God, give us grace that we might cast away the works of darkness, and put on the armour of light…”

from, The Collect for the First Sunday in Advent – Book of Common Prayer.

“You don’t believe in God, do you? Not virgin births, and rising again?” It was a question asked by an interested, but quite incredulous colleague.I replied that once you ‘get over’ the ‘God bit’, the other aspects of Christian faith provide less of a difficulty. But let’s not underestimate what we’re saying, for it shouldn’t be that easy to ‘get over’.

And the Word was made flesh, and dwelt among us, (and we beheld his glory, the glory as of the only begotten of the Father,) full of grace and truth. John 1:14

The same theme appears in a poem written by a Roman Christian known as Aurelius Prudentius Clemens, who lived in the 4th and early 5th Century; the poem is still sung as a carol in some Christian Traditions: Divinum Mysterium (“Of the Father’s Love Begotten”)

If you have a few minutes this Christmas, it may be worth reading. Originally written in Latin, an English translation was made by John Mason Neale, who also translated, “O Come, O Come, Emmanuel,” and is as follows:

Of the Father’s Love Begotten

1. Of the Father’s love begotten,
Ere the worlds began to be,
He is Alpha and Omega,
He the source, the ending He,
Of the things that are, that have been,
And that future years shall see,
Evermore and evermore!

2. At His Word the worlds were framèd;
He commanded; it was done:
Heaven and earth and depths of ocean
In their threefold order one;
All that grows beneath the shining
Of the moon and burning sun,
Evermore and evermore! 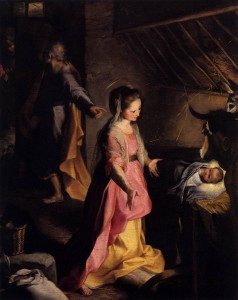 3. He is found in human fashion,
Death and sorrow here to know,
That the race of Adam’s children
Doomed by law to endless woe,
May not henceforth die and perish
In the dreadful gulf below,
Evermore and evermore!

4. O that birth forever blessèd,
When the Virgin, full of grace,
By the Holy Ghost conceiving,
Bare the Saviour of our race;
And the Babe, the world’s Redeemer,
First revealed His sacred face,
Evermore and evermore!

5. This is He Whom seers in old time
Chanted of with one accord;
Whom the voices of the prophets
Promised in their faithful word;
Now He shines, the long expected,
Let creation praise its Lord,
Evermore and evermore!

6. O ye heights of heaven adore Him;
Angel hosts, His praises sing;
Powers, dominions, bow before Him,
And extol our God and King!
Let no tongue on earth be silent,
Every voice in concert sing,
Evermore and evermore! 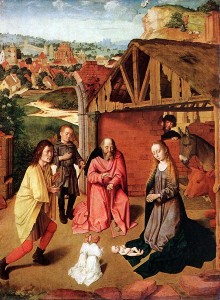 7. Righteous judge of souls departed,
Righteous King of them that live,
On the Father’s throne exalted
None in might with Thee may strive;
Who at last in vengeance coming
Sinners from Thy face shalt drive,
Evermore and evermore!

9. Christ, to Thee with God the Father,
And, O Holy Ghost, to Thee,
Hymn and chant with high thanksgiving,
And unwearied praises be:
Honor, glory, and dominion,
And eternal victory,
Evermore and evermore!