The Argument for God’s Existence from Moral Laws

1)      There are moral laws. If our moral feelings were human inventions or the outcome of a blind meaningless process like evolution, we could safely and rationally ignore them when it was safe and convenient to do so.  But the moral rules seem binding and inescapable. Why ought we to love others as much as ourselves? Why should we try to be selfless? Why is it wrong to neglect these rules? We need some explanation.

2)      Christians may argue that God explains the moral law. This is an argument for God’s existence. It is not an argument for the necessity or the truth of scripture! We are not arguing that we need the Bible to have moral knowledge. That would be a strange position for the Christian to take. Romans 2 and 1 Corinthians 5 assume that believers and unbelievers can have moral knowledge without knowing the Scriptures; and these passages also assume that unbelievers can be more moral than believers!

3)     There can be differences and arguments about morality. For example, some believe that capital punishment is right and some believe it is wrong. However, don’t lose sight of the moral laws that both sides agree on. We all agree that justice, love and forgiveness are good and that we have an obligation to pursue all three. We all roughly agree about the broad content of the moral law. We disagree about its detail and how to apply it.

4)      The moral laws make little sense in an atheistic universe. Why should I be obligated to pursue that life if it interferes with my own desires? If I have no purpose, and if there are no consequences for ignoring moral values from time to time, why shouldn’t I pursue selfish pleasure when it is convenient? Why shouldn’t a society place profit above justice? In the absence of God, who do we have duties to when no-one else is watching?

5)      Can science explain morality away? Suppose one reason that we put our children’s well-being ahead of our own is because natural selection favoured those ancestors who had developed parental love. Does knowing why we feel that obligation mean that we don’t really have that obligation? Can we reasonably set aside our obligations to our children? Not at all. The social sciences could plausibly explain the rise and development of science. That would not mean that our scientific beliefs are false. Biologists explain why our perceptual systems developed. That does not mean that we should doubt our senses.

6)      Theism provides an excellent explanation for the moral laws. If God created us we live in a moral universe. It would be irrational and dangerous to ignore the rules laid down by the one who made us. God would provide the ultimate source of moral authority.  God would have the knowledge, the character and the power to be the perfect moral authority. Persons do not have duties to ideas or principles: we have obligations to other persons. God would have “property rights” over his creation: this fact would explain why obligations exist and are binding; God’s instructions (revealed to conscience and reason) become our duties.

7)      As the source of everything else God would be the most valuable thing in existence. As a perfectly rational creator, and the ground of all being, he would be identical with the greatest good.

8)      Some of the most moral laws protect the value of the individual human person. Christian theism makes sense of these laws.  If atheism is true humanity is the transitory, accidental outcome of a meaningless process – we’re just bundles of atoms in the void – and ultimately inconsequential. We might be of value to a few other inconsequential beings while we’re here; but that doesn’t really give each individual being very much value. If Christianity is true, each human resembles the most important being – God – in important ways – God is personal, and we are personal. Moreover, God made us to live in a relationship with him. So each human has a deep purpose and is of eternal consequence. Each human is rare, vulnerable and precious. To destroy a human life is evil: it is to destroy something sacred. To nurture and protect human life is to do something of eternal consequence.

9)      Our moral obligations would be rooted in the commands of God (discovered through conscience and moral reflection.)  An `obligation’ is something that constrains and binds us. We feel a kind of pressure to conform to the moral rules. We feel shame when we break the rules. But we normally feel shame before a person; we normally have obligations to other agents. It’s as if our consciences communicate the commands of a law-giver.

10)       Does God invent “right” and “wrong”? Does he create them as you might arbitrarily lay down the rules of a new game? Of course not. The moral value of the individual is not contrived by God; it flows logically from the facts about who he is and the universe he has created. We have not said that God is the only source of every important fact about morality; we have not argued that there would be no moral values in the absence of God (although we think that argument could be made). But here we have only said that God best explains three important features of morality. He explains why individuals have great intrinsic value and why the moral life is a rational life and why we have obligations.

As J Budzisewski points out

Law, in the full sense of the term, is more than just an enactment by superior power; it must be an ordinance of reason, for the common good, made by legitimate public authority, and made known. To be confident that natural law is really law is to believe that it fulfils all four of these conditions, not just one. Interestingly, then, … natural law as law not only points to the reality of God, but also tells us something about His character. If natural law is really law, then God must be reasonable, good, and worthy of obedience. If natural law is First Law, the law on which all other law depends, then He must be First Reason, First Good, and First Authority.

12)   Can atheists be good? Yes: indeed many atheists are more moral than many Christians – in terms of their patience, common sense and generosity. To be human is to have the imprint of the moral law on us. Can atheists explain the moral law? That is a different matter altogether! But the short answer is no. 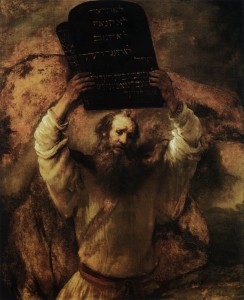 But what about Scripture? Where does it fit in?

13)   While we bring our own moral beliefs to Scripture, Scripture challenges and corrects many of our moral convictions. For example, when we understand the Bible’s teaching on the importance of sacrificial love deepens our understanding of that virtue.   The scriptural call for a pure heart, the intensity of God’s holiness and the need for forgiveness leads us to  abandon any belief in our own self-righteousness, repent to God and trust in Jesus.

14)   As evangelicals we believe that the Bible is inspired and  infallible – but it is not a “how to” guide for every ethical dilemma. We cannot flick through its pages to find a proof text for every decision. To be sure there are absolute commands – lust and adultery are always forbidden, for example. But there is wisdom and advice also – it is better to show mercy than to perform tedious religious rituals. There are characters to emulate – above all Jesus – and narratives to inspire. When we read the Bible our overall aim must be to become the sort of person God wants us to be. We do not read to update our databanks; we read to change who we are.

This entry was posted in Existence of God, Quick Thoughts and tagged Can We Be Good Without God, Faith and Reason, God and Evidence, Good and Evil, The Moral Argument, Things Science Can't Explain. Bookmark the permalink.