Why Christian Atheism Means Nothing

In the previous article about Christian Atheism (here called ‘New Religion’) we tried to outline its curious practice of not only borrowing the language of the transcendent to establish meaning in a world where none exists, but also how it specifically draws on the language of Christianity in order to deny the existence of the Christian God.

This time we will consider some of the implications, and what we might say about them.

We can begin here: the aim of the ‘New Religion’ is to encourage an acceptance that God is dead.

“It is for the mad men and women, like Nietzsche, who are ready to hear the crash of the thunder in their lives.”

This – taken together with the comments included in the previous article about Good Friday, the cross and the resurrection – means we can dismiss any notion that the ‘New Religion’ is merely about giving people ‘permission’ to acknowledge and explore their doubts.

Everyone doubts something, Christian people included, and the Church has rarely been afraid of it. What the Church has never said, however, is that our doubts are good because, “There is no Narnia, no Overland, no sky, no sun, no Aslan,” and that our doubt is our salvation.

Can you hear the new Religion reinterpreting Ephesians?

“For it is by love that we are saved, through doubt and denial; and that of ourselves, for it is not the gift of any god or universe.”

(More of the reference to love later).[i]

But the first response to ‘New Religion’ is to notice that it exists to encourage atheism, by way of existential religious experience, language, and denial.

Don’t be Distracted by Religious Language

It follows then, that if religious language (and particularly Christian language) is being used we should be careful not to be distracted by it. In other words, as you read the new theology, if you read it, don’t go looking for meaning.

“Let us notice that no word is as meaningless as is the word god.” (Francis Scheaffer Trilogy, Here is There and He is Not Silent, page 286, IVP, pub. 1990.)

And as much it uses the language of religion, the New Religion does not intend to suggest that gods exist. At each and every point, whether by use of parable, by talk of love, hope, Jesus, crucifixion, resurrection or god, the new religion does not mean a divine Jesus, a physical resurrection or a transcendent self-existent creator God. Indeed it is questionable if the new religion means to suggest the reality of anything beyond an individual’s subjective experience.

Crucially, however, we should remember this:

The language of the Christian religion remains only to the extent that it is useful in burning what might be described as the ‘chaff’ of orthodoxy. (Pyrotheology)

New religion is an entire rewriting of the warp and woof of historic Christianity, and we might read it to be something like this:

The incarnation has nothing to do with God becoming human – it is, rather, a way of describing a human being who sought to identify with the pain and suffering of some. The crucifixion was not an atonement or the darkness experienced by Jesus as He was separated from the God He knew to exist – it is, rather, a way of saying that our best hopes, including our hopes of God, must die. And the resurrection is not, therefore, anything at all, except a reminder that recurring hope is a difficult to shake off vanity.

Don’t be distracted by its religious language, it is used, but means nothing.

Faith, Hope and Love – This One Remains

Love remains, however, even if everything else does not. At least that is what we are told, so we must ask how this can be.

“What opens us up to awe and wonder is not a universe any more than a god: it is love.”

“We might need a word for this work against an uncaring universe through which we fly alone. Might we use love?”

To be perfectly honest I prefer the latter use of the question – “Might we use love?” – for it seems to contain a willingness to acknowledge that Nietzsche’s thunder might have drowned out all else, and is, for that, more consistent. Here, at least, might be a recognition that in acknowledging that “this black pit of a kingdom” (to use Puddleglum’s description again) is the only world we have, while at the same time holding out for love, is a ‘lie’ as big as the one we have told ourselves about gods and transcendent hope. 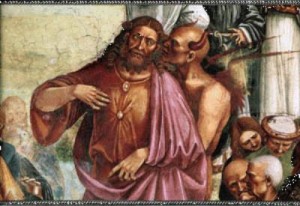 Either way, this is the closest we get to a realisation that in declaring this to be a universe without meaning, it may be best to exercise some caution before we attribute meaning to ourselves. But while apparently more consistent, even at this point the new religion must, surely, realise that it contradicts itself. Even if it thinks it has killed god, it cannot kill meaning in a meaningless world; and even a tentative “Might we use love?” only serves to peak the dilemma: from whence has love and meaning come?

From whence have they been conjured? Consistency demands that it cannot be from ourselves.

This ought to bring an admission of defeat. If the universe is meaningless and I am part of the universe, then any talk of meaning must lick this world hollow (Puddleglum again). But for the new religion, while the transcendent and meaning are dead, it must continue on as if they are alive.

And it is the darkest irony – in encouraging us to “escape the prison-house of meaning”, it can only move us into solitary confinement – and the Christian Church has a word for that.

…they “are saying in effect that man can only function as man for an extended period of time if he acts on the assumption that a lie is true. You cannot find any deeper despair than this for a sensitive person. This is not an optimistic, happy, reasonable or brilliant answer. It is darkness and death.” (Francis Scheaffer Trilogy, Here is There and He is Not Silent, page 286, IVP, pub. 1990.)

So Far, no Further

We should be thankful, however, that the new religion clings to something – this is, in the deepest sense, a Divine mercy.

Having suggested that the ‘Fundamentailsts’, presumably anyone who considers the Overland to be real, of insecurity, and the New Atheists of not going far enough, New Religion then seeks its own miracle by attempting to create love and meaning ex-nihilo.

And why does the new religion so need this ‘miracle’? Because our existential experience tells us that love and meaning are essential, and they must be conjured from somewhere; and the new religion can no more live with the consequences of the death of God than the New Atheists it critiques.

In doing this the new religion reminds us that while we might toy with a meaningless universe, we dare not, we cannot live that way; and that, as Puddleglum might say, is a “funny thing”.

[i] Interestingly, at this point that the New Religion has also offered a critique of New Atheism: it does not go far enough. For that argument, you can follow these links.