Are the Gospels Reliable? 10 Quick Points

1) The first Christians had the motivation to keep their memories of Jesus intact, they had the means for accessing good information about Jesus, and the evidence is that they were trying to faithfully preserve a reliable history of his life and teachings.

2) Sociology teaches us that groups like the first churches generally do everything that they can to preserve information about their founder. Historian and New Testament scholar Craig Keener points out that ancient Mediterranean world highly prized oral memory. Learning lengthy speeches by heart  was one of an orators basic tasks; storytellers would be expected to recite large sections of Homer from memory.

Memorization was the most widespread feature of ancient Mediterranean education. Memorizing sayings of famous teachers was a regular school exercise at the basic level; 60 students at various levels also memorized examples.  Similarly, higher education (after about age sixteen) included memorizing many speeches and passages useful for speeches.” Keener, ‘Assumptions in Historical-Jesus Research’

He also notes that first century Palestinian culture prized memorization and oral tradition. We learn from Josephus and other sources that Jewish education emphasized memorization of Torah. We also know that Jewish rabbis expected their disciples to memorise and pass on their teachings:

No written rabbinic source dates to the first century, but it is hardly likely that this evidence would be discontinuous with all the other Jewish and Greco-Roman evidence that we do have. Rabbinic evidence is consistent with this expectation: rabbis lectured to their pupils and expected them to memorize their teachings by laborious repetition. This practice of memorizing teachings would have been particularly intense for those preparing to be teachers themselves…Because this traditioning in practice tended toward ‘net transmission’ rather than ‘chain transmission’ (i.e., the sayings became the property of the rabbinic community, and not only of a single disciple of a teacher), transmission could be guarded more carefully in the fi rst generation or two.

3) We know that memorisation was an important part of Jewish education, and especially the education of a Rabbi’s disciples. If Jesus’ students followed the customs of their day, they would have memorised many of their master’s teachings. Writing supplemented and aided this process of memorisation. Wax and leaf-ink tablets could be used for note taking. There was also a sophisticated scribal culture in Israel, and particularly in Jerusalem. It would have been relatively

4) We know that eyewitnesses, like the Twelve and Mary of Magdala, were highly esteemed in the Early Church.We also know the mother Church at Jerusalem had considerable authority in the first decades of Church growth. So there was a ‘check’ on the types of story that could circulate about Jesus.

5) The Gospels include a lot of information that the Church was unlikely to invent—for example Peter’s denial and Judas’ treachery. It is also remarkable that the Gospels say very little about the issues that vexed the earliest Churches. The first Christian communities were bitterly divided over relationships between Jewish and Gentile Christians. Yet Jesus says nothing about circumcision and little about how Gentiles should treat the Old Testament law. If the early Church was in the habit of inventing stories, why did it not settle these disputes by fabricating a parable or two?

6) Gerd Thiessen in The Shadow of the Galilean points out that many texts in the Gospels demonstrate knowledge of Palestine in third decade of the first century. For example Matthew 11v 7 demonstrates knowledge that Herod Antipas stamped the image of a reed on his coins; Matthew 15 v 26 can only be understood when we know that that the Jews of Galilee made bread for the rich of Tyre. Unless one had knowledge of the locality, one might wonder how John the Baptist could baptise in the Jordanian wilderness.

7) The Gospels address issues that were irrelevant to the gentiles, who were joining the Churches in ever greater numbers at the time of their writing. Why invent Jesus teaching about the Temple tax, or about forgiving your brother before you offer a sacrifice, when most of your readers had no access to the Temple? Why include a prophecy that tells Christians living near Jerusalem how to act in the face of an impending Roman invasion? These passages became completely irrelevant after the Roman-Jewish war and the destruction of the Temple in AD70. It only makes sense to include these stories in your Gospel if you are trying to preserve information about Jesus. 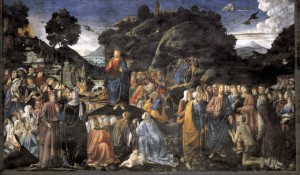 9) Several notable scholars have developed a convincing case that the Gospels contain eyewitness testimony. Ben Witherington III inWhat Have they Done With Jesus (HarperOne:2007) notes the importance of key eyewitnesses (like James, Peter, Mary and the ‘Beloved Disciple’) in the early Church. Richard Bauckhamin Jesus and the Eyewitnesses (Eerdmans: 2008)notes that Papias, a first Century Bishop, preferred the testimony of living eyewitnesses to written texts; this illustrates the importance of eyewitnesses in early Christianity. The Gospels were written within a generation of Jesus’ death—so important eyewitnesses could be consulted.

10) Scholars have long noticed that many passages in Matthew, Luke and Mark are similar, and some are identical. Most scholars believe that Matthew and Luke wrote after Mark, and used Mark as one of their sources. Whatever the case, it is certain that a deal of copying went on. This shows that the Gospel writers used their sources carefully—so much so that they could copy sections word for word.

The first Christians had the motivation to keep their memories of Jesus intact, they had the means for accessing good information about Jesus, and the evidence is that they were trying to faithfully preserve his memory. So sceptics should acknowledge that, at the very least, the Gospels are excellent historical sources.

This entry was posted in Historical Jesus, Quick Thoughts. Bookmark the permalink.