In a widely viewed Cambridge debate, William Lane Craig’s moral argument for the existence of God was dismissed by philosopher Arif Ahmed:

Many sceptical sites, including Jerry Coyne’s Why Evolution is True and rationalwiki have also taken pains to argue that morality is not objective. We might wonder why the objections are so strident; after all, some atheist philosophers have defended a belief in objective moral truths. Perhaps it is because objective morals do not fit neatly into a world which is composed purely of physical objects; and as we have noted, objective moral facts are sometimes used as evidence for the existence of God. 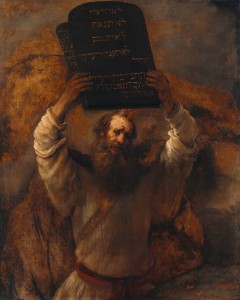 So, how easy is it to refute a belief in objective morality? Is Dr Craig’s claim that we all believe in moral values fit only for populist politicians and evangelical theological seminaries? After all, Dr Ahmed seems to be condemning Dr Craig’s use of an audacious premise; or at the very least, he is appealing to his audience’s belief that one should not present shoddy arguments to students at Cambridge. He seems to be presupposing some normative standard.

What would it mean for morality to be objective? First, if morality is objective a claim about moral values or obligations must either be true or false. Second, moral duties and values must be universal: if something is good, it is good everywhere and always.Third, moral facts cannot be the product of our desires. Lust does not become good because a society decides to worship pleasure; bravery does not become bad because we prefer life and comfort to compassion and sacrifice. Finally, morality must be part of the “furniture of the universe.” Virtue, goodness and rightness must be as real as electromagnetism and gravity.

But if morality is part of the furniture, then we might wonder why moral disagreement occurs so often. Different cultures disagree about important moral rules. Some justify euthanasia and abortion, other condemn them. Some have glorified war and conquest while others have blessed peacemakers. Humans do not seem to be able to agree on one code of moral absolutes.

However, the extent of moral disagreement between cultures is both overstated and rather easy to explain. Every functioning culture views social harmony as a great good which ought to be pursued; each society has some concept of theft and murder. Every culture believes in moral values like compassion, courage, gratitude, fidelity and honesty. It is interesting that every functioning culture has taboos concerning the procreation of human life: rules about adultery and incest abound. So there is much more agreement about moral truths than many sceptics would like to admit.

Moral disagreements will occur when we try to rank these values and virtues in order of importance and then apply the results to a complex, changing world. So a culture which applies virtues like courage, honour and loyalty above all others might be less inclined to pacifism. This culture would not deny that compassion is good – even Himmler acknowledged that it had its place. It would simply argue that greater goods are exemplified in the battlefield. (However, a culture which glorifies warfare will tend to self-destruction: such a society can destroy, but it cannot build or heal. A culture cannot go on conquering forever; it will collapse as it overextends itself or runs out of worlds to subdue.)

There is widespread agreement that casual cruelty and malice are wrong; no-one would permit a sadist to torture a child merely for his pleasure. But while it is easy to agree that an innocent human person should be protected by law it is more difficult to determine who is innocent and who counts as a person. Is a human in a Persistent Vegetative State a person? What about a human with a beating heart but no higher cortical brain function? A cold-blooded murderer is not an innocent- but how can we be sure that a person on death row is a cold-blooded murderer? And even if we know for sure that he is a calculating killer, can we consistently demand that he be executed and still preach compassion and forgiveness?

However, we cannot conclude there is no truth when the truth is difficult to discern. Knowing the right and discerning the good would, like every other complex skill, require insight, patience and wisdom. Not everyone will possess these in equal measure; nor will everyone be equally motivated to accept moral truths when they are staring them in the face. Profit and pride, for example, can incline us to ignore the imperatives to be honest and kind. Given the scale and the complexity of the problems we face it would not be surprising if individuals or entire cultures were simply mistaken in some of their moral beliefs.

So the mere existence of morally controversial issues does not count against objective morals. In fact, controversies rage in just about every field of study. Physicists debate the merit of string theory, biologists the true unit of selection and the merits of cladistics, historians the causes of wars and economists the effects of inequality. Politicians and businessmen often must contend over the best course of action. There is some fact of the matter in all of these debates – but knowing and then accepting the correct answer can be difficult. It is not surprising that moral controversy is a fact of life.

Setting relativism aside, then, we can turn to the argument that objective moral values do not fit into a “scientific worldview”; according to scientism, the world should only be explained by  physical facts. Indeed, we have no need to appeal to objective norms to explain human behaviour: disciplines like evolutionary biology and psychology are sufficient for predicting and understanding human behaviour. Sociological or evolutionary explanations tell us why we have moral feelings. Morality is explained away as a useful fiction, an illusion forced onto us by our genes to promote co-operation.

But can science ever explain morality away? Suppose one reason that we put our children’s well-being ahead of our own is because Natural Selection favoured those ancestors who had developed parental love. Does knowing why we feel that obligation mean that we don’t really have that obligation? Can we reasonably set aside our obligations to our children? Not at all. The social sciences could plausibly explain the rise and development of science. That would not mean that our scientific beliefs are false. Biologists explain why our perceptual systems developed. That does not mean that we should doubt our senses.

It’s difficult to see how any scientific explanation of moral feelings would allow us to live as if there are no moral demands on us; it seems impossible to live as if morality is an illusion. In The God Delusion Dawkins calls morality a “blessed, precious mistake”, and he believes it. But if morality is a mistake nothing is really blessed or precious. Suppose our moral feelings are nothing more than an instinct to co-operate with other humans. If something like this is the case, then a mother’s instinct to care for a threatened child is no more “blessed”, “precious” or “good” than an impulse to sneeze. That strikes us as wholly implausible.

Moral experience is inescapable. The news media continually asks how we should react to particular events; great literature often depends on moral dilemmas. This leads us to believe that there are normative standards that we all should acknowledge; we suppose that we all feel the power of those standards. These beliefs have tremendous explanatory power. By knowing something about another’s virtues or vices we can influence and predict their actions; we can gain great insight into their character. Indeed, Dawkins and other New Atheists rely heavily on moral intuitions to motivate readers and to challenge the injustices of organised religion; it would be practically impossible to fully understand their writings in terms of neurons and cognitive functions.

We cannot even explain our own actions without acknowledging the obligations we feel when we make promises or strike up a friendship. Morality cannot be a matter of personal or cultural taste. We can compromise on matters of taste or preference; but we will not compromise with someone who takes delight in malicious torture. And we certainly feel the weight of some decisions over others: there is a clear difference between deciding to leave one’s job and choosing to leave one’s spouse and children.

Moral standards do not appear in the scientific picture of the world, but there is a parallel here with mental events. Although we can detect  another’s emotions, intentions, thoughts or beliefs through their face, words or actions we cannot directly see events in another’s consciousness. Moreover, science cannot explain or detect what it cannot even describe. The experience of colour is not included when we describe the effect of photons on photosensitive cells and the depolarization and repolarization of neurons; the feeling of pain is not captured by a description of sodium ions fluxing in and out of a semi-permeable membrane.

However, our belief in other minds is justified because the ideas involved are clear, useful and have great explanatory power (once we know another person’s motives, emotions and beliefs we gain great insight into actions and can make generally accurate predictions about that person.) And just we cannot explain the world without a belief in mental states, we cannot explain others without believing something about their moral properties. A belief in objective morality is practically inescapable; our deliberations and practices are senseless if it is merely an illusion. The simple fact of the matter is that moral concepts have great explanatory power; furthermore the experience of morality is a central feature of human existence. And any worldview which attempts to explain morality away is deeply unconvincing.